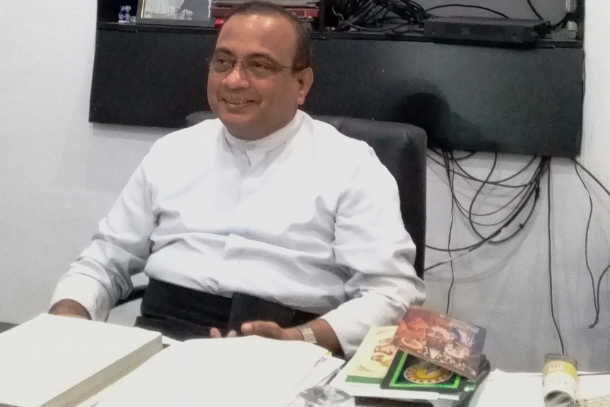 Sri Lanka’s longest-surviving English-language newspaper is a Catholic weekly that has protected the rights of the small community with a fierce sense of independence.

“We have always maintained impartiality,” said The Messenger newspaper’s director-editor Father Camillus Fernando at his office at the Colombo Catholic Press in Borella.

The first copy was printed in 1869 at a private press established by Catholic lay entrepreneurs in Kotahena but in 1901 the newspaper moved to its present location.

The present editor noted that the newspaper has maintained its independence over the years and refused to be influenced by vested interests.

“Neither the Church nor any country or political party influences the publishing of the paper. We never involve ourselves in any political situation,” said Father Fernando, who has served as editor for the past six months and has edited Sinhala edition Gnanartha Pradeepaya for four years.

The paper’s main struggle has been to ensure that the rights of the Catholic community are protected.

The anti-Catholic trend in Sri Lanka started in 1956 with a change in political power and the Buddha Jayanthi celebration that generated a lot of hostility toward Catholics.

As most chiefs of the armed forces and several public service officers were Catholics who had attended church-run schools, most misconstrued the situation as a subversive movement called Catholic Action. This finally resulted in the takeover of schools and the expulsion of nuns from hospitals.

The most powerful expression of hostility to this move was through the Catholic press, which brought a backlash from the state. Newsprint was rationed and the Catholic press received a highly reduced quota. But help came through others in the Church and the community.

“This is a national religious paper that mainly caters to the needs and wants of Catholic people on social doctrine, dogma and all information about the Church,” Father Fernando said.

One of The Messenger’s most prominent editors was the late Hector Welgampola, who later retired as executive editor of ucanews.

Printing has never stopped at the Colombo Catholic Press and the weekly is the only English newspaper in the country that has remained in print continuously for the past 150 years.

Father Fernando pointed out that the paper has a huge influence and is picked up by most of the English-reading public, some of whom are key decision-makers and influential persons in the country.

Circulation of the newspaper has been on the rise, the editor said, adding that with the changing times information may change within minutes but that The Messenger continues to deliver essential knowledge.