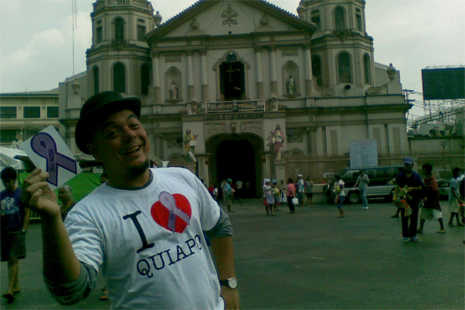 Carlos Celdran outside the Quiapo Church

President Benigno Aquino’s willingness to risk excommunication to push through a responsible parenthood bill has prompted a birth-control advocate to promote the reproductive health (RH) bill outside a church in Manila's Quiapo district. Controversial tour guide Carlos Celdran distributed stickers to motorists outside Quiapo Church yesterday. "RH [reproductive health bill] Now!" read many of the stickers. Retired Lingayen-Dagupan Archbishop Oscar Cruz called Celdran a “big joke.” “I think he’s a big joke because he shows no responsibility, he just says what he likes and he is boundless. He has no beliefs, no values,” the archbishop said. “I don’t think people take him seriously. Imagine destroying a banner and carrying a placard around a cathedral? What is that?” added Archbishop Cruz. Last year, Celdran disrupted a religious service inside Manila Cathedral by holding up a placard with the word “Damaso,” written on it, referring to a fictitious priest who fathered a child in a novel by national hero Jose Rizal. Last month, Celdran was caught on closed-circuit television removing an anti-RH bill banner from the Catholic Bishops' Conference of the Philippines compound in Manila. Archbishop Cruz described Celdran’s stunts as an attempt to grab attention. “I understand him. I understand his Spanish blood which can probably be traced to Padre Damaso,” he said. “I think he is trying to be popular. It’s OK. The poor man is trying to grab attention,” the prelate said.