Stay of execution of Filipino woman in Indonesia at risk 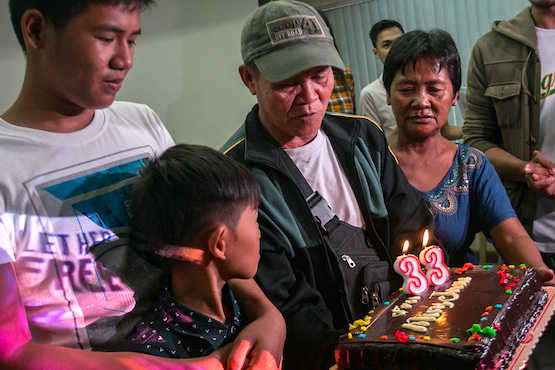 The family of Mary Jane Veloso, a Filipino woman on Indonesia's death row, celebrates her birthday in Manila on Jan. 10. In a recorded message, Veloso appealed to Philippine President Rodrigo Duterte to intervene and allow her to testify against her traffickers. (Photo by Mark Saludes)

The stay of execution granted by Indonesian authorities on a Filipino woman on death row is in danger of being retracted after a Philippine court decided to prohibit her from testifying against her alleged traffickers.

The lawyers of Mary Jane Veloso, a Filipino migrant worker convicted of drug trafficking in Jakarta in 2010, warned that the stay of execution granted to their client could be retracted by Indonesia any time.

"The stay of execution was granted to Mary Jane to allow her to act as a witness against people who duped her," said lawyer Edre Olalia, Veloso's counsel and head of the National Union of People’s Lawyers.

He said the decision of the Philippines’s Court of Appeals not to allow Veloso to give testimony against her alleged recruiters neglects the purpose of the temporary reprieve granted by the Indonesian government.

"Patience can run out," said the lawyer. "If Indonesia decides that the case in the Philippines is going nowhere, then they might just send Mary Jane to the firing squad."

In a recorded message released Jan. 10 to Philippine President Rodrigo Duterte, Veloso begged the president to intervene on her behalf and allow her to testify against the people who allegedly made her carry heroin to Jakarta in 2009.

"I know that you hate drugs and want to eradicate drug syndicates ... but how are you going to prevent the drug connections if you muffle my voice in the court," said Veloso.

"Mr. President, in this case I am facing right now, how will you be able to know if I am innocent or not if you are not letting me testify to speak the truth," added the Filipino migrant worker.

Veloso, who celebrated her 33rd birthday on Jan. 10, was arrested in Indonesia for smuggling 2.6 kilograms of heroin. Throughout her trial, she maintained her innocence, claiming that she was duped into carrying the suitcase.

She was sentenced to death in 2010 but was spared due to a moratorium on capital punishment. She was later scheduled to be executed in 2015, but was granted a stay so she could testify against her alleged traffickers.

On Dec. 13, however, the Philippines' Court of Appeals prohibited Veloso from giving testimony through a "Deposition Upon Written Interrogatories," a procedure wherein a court officer takes the testimony of the witness who is unable to attend a court hearing.

In its decision, the Philippine court said allowing the deposition in the absence of Veloso's alleged traffickers — Maria Cristina Sergio and Julius Lacanilao — violates the duo's right to confront their accuser in person.

Olalia said a "motion for reconsideration" will be filed in the coming days, but reiterated his warning that the appellate court's decision will affect Veloso’s execution reprieve.

Philippine church leaders have joined in protesting the court's decision.

Bishop Ruperto Santos of Balanga, chairman of the Episcopal Commission on Migrants and Itinerant People, said it is Veloso "who must be protected, defended, and be saved, not the human traffickers."

The prelate said the court’s decision is "an added pain" in the "continuous agony" of the Filipino worker. "To silence Mary Jane is to side with lies. Let her speak and the truth will be heard," said the bishop.

In a statement, the ecumenical group, Churches Witnessing With Migrants, said the court decision is "a major stumbling block" in Veloso's pursuit to prove her innocence.

Protestant Pastor Irma Balaba, the group's spokeswoman, said the court should have given "primary consideration to the rights" of Veloso and "let her tell her story and the events that led to her ordeal."

The Philippine Interfaith Movement Against Human Trafficking appealed to the Philippine government not to stop clemency appeals for Veloso to the Indonesian government.

"While we are fighting a judicial battle here, [Duterte] must do everything in his power to save [Veloso]," said Father Rex Reyes, spokesman of the group.