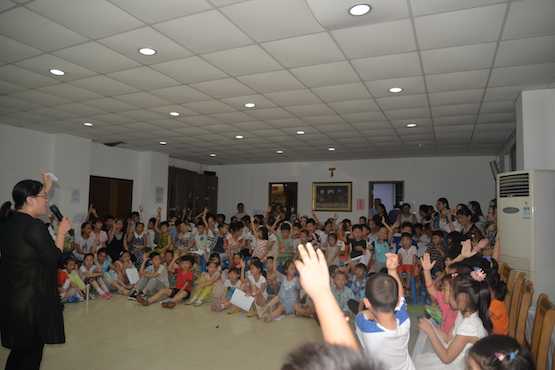 A 2016 file photo of children at the beginning of a summer camp run by the Immaculate Conception Cathedral Parish of Nanjing Diocese. (Photo supplied)

State security officials in eastern China have banned a parish from running a summer camp resulting in a priest lodging a written complaint that went viral on social media.

Father Wang Qingwen of Xuzhou Diocese in eastern Jiangsu province lodged a complaint with the Communist Party secretary of Suqian city over the ban that occurred without explanation.

In his letter, the priest, who is also a director of Suqian city's government-sanctioned Catholic Patriotic Association, said he was shocked to hear from religious affairs officials on July 3 that security officers were not allowing the parish to run a summer catechism course even as other dioceses were holding similar programs.

"Churches across the country have been [running camps], and even the official bimonthly magazine Catholic Church in China reports news on these classes every year," Father Wang wrote in the letter dated July 4.

Father Wang wrote that China's constitution allows citizens the freedom of religious belief and international law stipulates that children also have religious freedom. This right is safeguarded by their parents "not the Party and the government," he wrote.

The priest noted that more than 400 priests across China in his chat group told him that they are running summer camps. In his letter, Father Wang wondered "why security officers of Suqian city alone have to ban us?"

Running such camps is a popular way for the church in China to provide formation to children of Catholics and is used as a time to evangelize other children.

Reporters  from ucanews.com could not reach Father Wang or Bishop Wang Renlei of Xuzhou, who has dual approval from the Vatican and the government by deadline but a church source in another parish of Xuzhou said the authorities similarly did not allow them to hold summer class this year. Nor did the authorities offer any explanation for the ban.

But the situation of summer classes in other dioceses across China is varied.

A parish priest in Chengdu Diocese of southwestern Sichuan province confirmed that there was no obstruction to their summer class as "the Party and government department are very supportive of it."

However, in southern Guangxi province, a priest who asked not to be named said they held the program in a low-key manner, "just like inviting friends' kids to play at our place for a few days."

In Henan province, Father Paul, a priest who did not want to reveal his full name or diocese, told ucanews.com that his diocese secretly held a program because the local authorities have banned them.

The priest explained that during a state-run learning class for clergy in February, they were reminded of "the principle that religion and education should be separated."

Father Paul heard that a camp teacher invited a Muslim parent to introduce Islam in the class.

"A video clip of this was spread by some students which drew the attention of the government, which thus reiterated the banning that religions should not interfere with education," said Father Paul.

"Currently we secretly hold camps in a rural parish. It is impossible to hold it in the city," the priest said.

In eastern Zhejiang province, Teresa, a laywoman of the open church community who only identified by her baptismal name, said authorities intervene in their programs if they are too open.

"If no one reports us to the authorities, we will continue to run the program while the officials will pretend not knowing about it," Teresa said. The authorities fear the church is "a poison flower" in the country. So, if we are low-key, they let us go. Otherwise, they will intervene," she said.