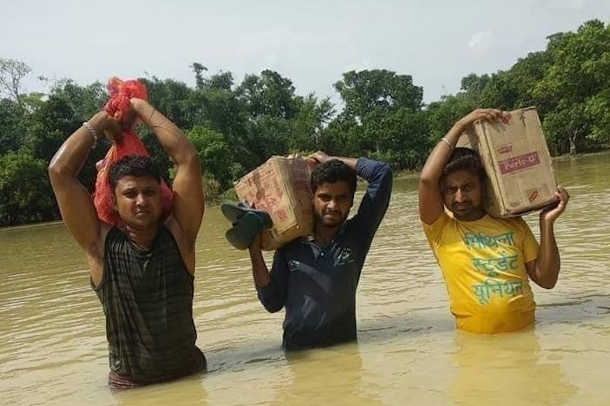 At least 127 people were killed and an astounding eight million displaced after rivers in Nepal burst their banks in the latest monsoons and swept through villages in the eastern Indian state of Bihar.

Catholic social work departments in the area are struggling to provide basic amenities to the affected such as temporary shelter, drinking water and sanitation facilities.

“Millions have been badly hit after the flood situation worsened over the past week,” said Bishop Cajetan Francis Osta of Muzaffarpur, the worst affected area.

Eleven of the 13 flood-hit districts are in the area of Muzaffarpur, which has been working with Caritas India.

Hundreds of villages are marooned, he continued, and “it is difficult to reach many affected areas because roads have been washed away and some are blocked because of uprooted trees.”

He said a police escort had been needed to carry food and other emergency supplies because of the possibility of looting — many people have been living without proper food and shelter for days.

Bishop Osta said the usual rainy season had not even begun yet in Bihar, yet it had witnessed unprecedented flooding due to the water torrenting out the Bagmati, Gandak and Koshi rivers in neighboring Nepal.

“Nepal has had so much rain its rivers and dams are now full and since our rivers are not that deep, the villages adjacent to them have flooded causing unimaginable damage,” the bishop added.

Six rivers originating in Nepal flow through Bihar. All of them have been flowing above the danger mark in Bihar for nearly three weeks, ever since catchment areas in Nepal experienced torrential rainfall.

Father Peter Charles, the diocesan social work director, said they were “taking stock of the situation with the help of Caritas India to provide much-needed relief.”

Jesuit social activist Father Jose Vadasserry said Jesuits, the most active religious group in the state, had distributed some 800 dry food packages among the Musahar (rat eater) people, one of the worst-hit communities in Madhubani district.

Hundreds of these Musahar people, a socially poor Dalit community, are stranded in the low-lying areas without drinking water and other basics of life. Their name literally means “rat eaters” because their poverty forces them to trap and eat rats.

Most of them people have so far survived in government-provided tarpaulin shelters by the roadside on higher ground. Many urgent supplies have only been operating in government schools and other buildings, however, and have not yet reached many areas, including relief camps.

“The monsoon has not yet become active in most parts of the state, however, the 13 districts that have been hit have witnessed unprecedented flooding,” said Father Vadasserry.

Official statistics said July 27 that some 8.5 million people had been affected in Bihar, where the death toll stood at 127.

The state government is running as many as 885 community kitchens in the affected areas and more than 6,000 people have taken shelter in eight relief camps, according to the disaster management department.

Food, medicines and other urgent supplies were being rushed to those in marooned areas, officials said.