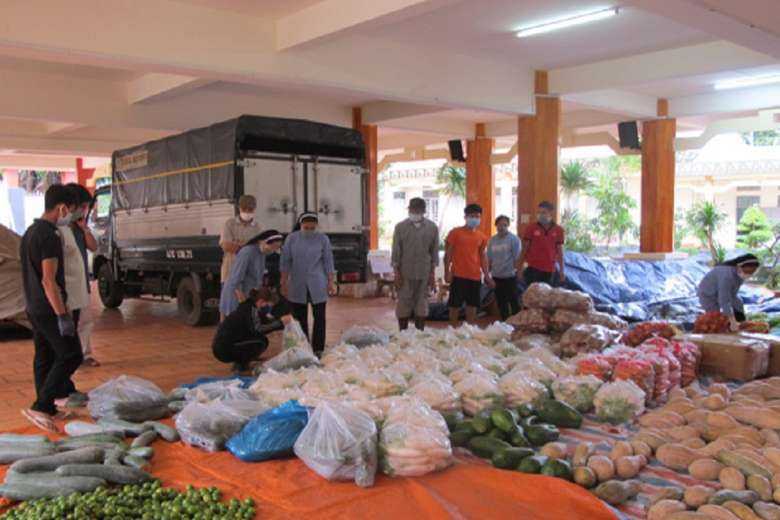 He said religious organizations have made donations to government-run funds for vaccinations, supplied medical equipment to hospitals, called on their followers to join frontline forces, and provided much food and basic commodities for people in misery.

The government official said local Buddhists use their worship places as quarantine centers, many pagodas offer free coffins to families of Covid-19 victims, store their urns without charge and pray for them. They also give medical supplies to Cambodia, Laos, India and Nepal.

Thang, former head of the government's committee for religious affairs, said followers of Buddhist sects based in southern provinces also provide medical treatment to Covid-19 patients at their clinics, set up charity shops and offer free meals to communities in quarantine and officials at border checkpoints. They also transport patients to hospitals.

"I am particularly impressed by images of Christian volunteers facing a high risk of infection taking care of patients and handing food to people in areas stricken by the outbreak and isolated places, as well as transporting medical supplies to hospitals," he said, adding that although many Christians are from ethnic groups and many are Covid-19 victims, churches make generous donations to the fight against the pandemic.

He praised many priests, religious and laypeople who have committed themselves to bringing tender care and the flame of love to patients at hospitals. "I am quite touched that many parishes and orders have used their facilities as quarantine centers and work with local hospitals to admit patients to their facilities to care for. Catholics signal clear determination to fight the pandemic and bring peace to the nation," he said.

“I would like to express my sincere gratitude to you for your great contributions. Your great dedication and donations help foster Christian values in the fight against the pandemic,” Thang said.

The official also extended his heartfelt sympathy to local Catholics who have faced damages and losses caused by Covid-19.

Thang called on religious groups to continue working with other sectors of society to contain the deadly pandemic and serve people in need.

On Aug 18. Father Joseph Nguyen Van Truc, who oversees pastoral care for youths in Can Tho Diocese, said Catholics who work and study in the contagion’s epicentre, Ho Chi Minh City, suffer lack of food, have no money to pay rent and need material and emotional support from the local Church.

Father Truc said the diocese launched the Can Tho in Our Hearts Program to support them. He asked people in need in the city to register with their home priests to get succor from the diocese by Aug. 28.

On Aug. 15, Archbishop Joseph Nguyen Chi Linh, president of the Catholic Bishops’ Conference of Vietnam, said Catholics in the country and abroad had donated 60 billion dong ($2.6 million) and countless tonnes of food and basic commodities to Covid-19 victims in Ho Chi Minh City since he launched the charity program in July.

Archbishop Linh asked local people to “continue being centers of love to care for our brothers and sisters and to contain the pandemic.”

Vietnam successfully contained the virus for much of last year but has since late April faced a surge in infections stoked by the highly contagious Delta variant.

The Southeast Asian country has recorded 381,310 cases since the pandemic broke out in early 2020, with 9,349 deaths, according to the government's data.

Vietnam has so far administered around 16 million vaccine doses but only 2 million people have been fully vaccinated among its population of 98 million.

On Aug. 24, Father Joseph Dao Nguyen Vu, head of the Office of the Catholic Bishops' Conference of Vietnam, said the Vatican had offered 100,000 euros ($118,000) to emergency aid and charity programs run by the Church in Vietnam as a way to express Pope Francis' emotional closeness to local Catholics.