St. Mother Teresa lives on 25 years after her death

Who cares if many mix up her biography a little, and presume she was born in India 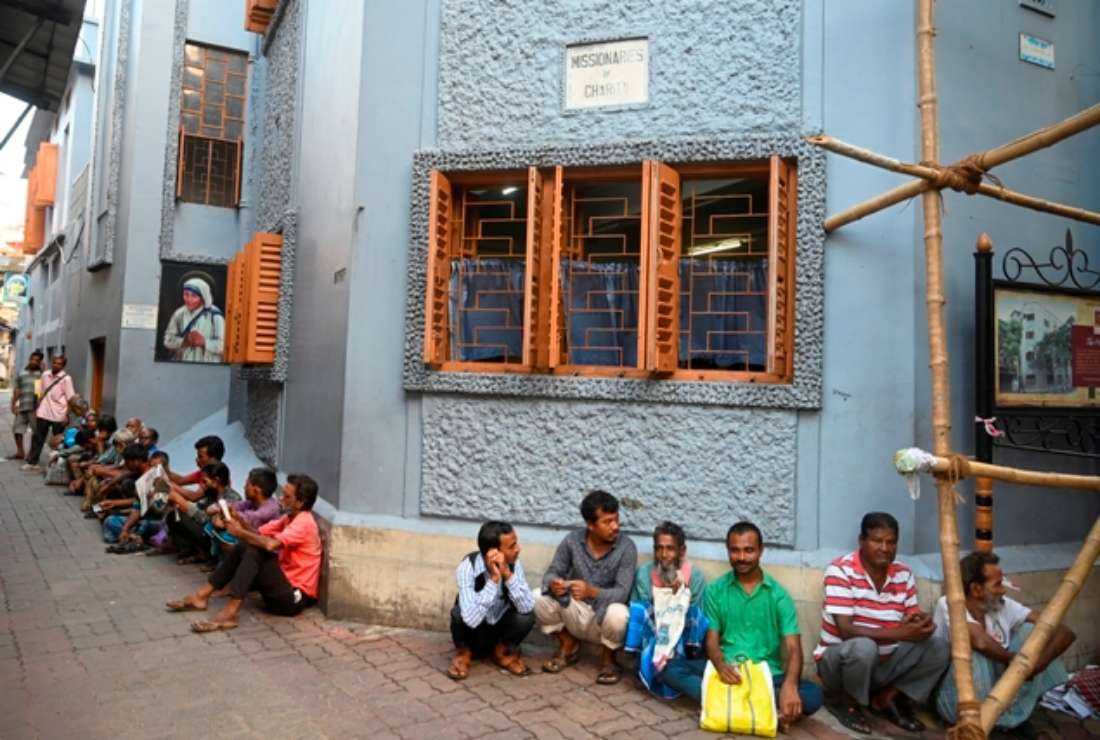 People wait during a special prayer on the occasion of “Peace Day“ to mark the death anniversary of Mother Teresa at the Mother House in Kolkata, India, on Sept. 5. (Photo: AFP)

If I may gloat, I am a member of the Mother Teresa Parish in India’s Delhi Archdiocese. I knew the Saint of Calcutta as a journalist in her lifetime, even argued with her on her position on abortion, and defended her in print when the editor of the country’s biggest English language newspaper sought to castigate her for supporting the cause of the Dalit Christians in the 1990s when they launched a national campaign for the restoration of their constitutional rights.

“Mother don’t divide your love,” the late Chandan Mitra, executive editor of the Hindustan Times, had said in a page one, eight-column article. The Mother had launched the Dalit movement at a rally held at the gates of the Sacred Heart Cathedral — the complex housing both the headquarters of the Catholic Bishops Conference of India and Delhi Archdiocese.

The government of the day, and her “secular” or apolitical followers did not want her to identify herself so closely with a community that has emerged from casteism within the Church, and before that, from a status that deemed them not fit to even cast their shadow on people of the upper castes.  Enlightened Hindu savants had called some of the Indian provinces Hell because of the manner in which they practiced untouchability.

The Mother remained unfazed and did not dilute her position. She continued also to do what she did best — serve the poorest of the poor, comforting the dying to bring some hours or days of human dignity to their last days, saving those she could, looking after infants, children of unwed mothers abandoned by poor families, or thrown away for being girls, or deformed, or sick. Many of these children have done exceedingly well for themselves as educated, professional citizens of India.

Governments and politicians have never been able to tame her, or after her death, her Missionaries of Charity, because their work touches something very living and human in the heart of the people, especially Hindus who are spiritual. I have seen this repeatedly in the children’s homes she ran.

During festivals, on birthdays of their own children, and on days holy to their family gods, women from very rich families come and engage in cleaning the premises, or bringing clothes to the children, and not just giving them away as gifts, but taking time out to be with the children.

For those moments in those homes, full of laughter and often with a small garden with flowers and a larger playground, there are sounds of joy one would dream of in a cathedral.

The mothers see in the Mother something much more than a Christian social worker, Nun, or now Saint. She becomes the mother goddess of their own pantheon. Nothing blasphemous for them in this feeling, even if it may embarrass the more orthodox or fundamentalist amongst the Catholics.

The current government, which has demonized Christian and Muslim clergy and institutions in the guise of attacking fraudulent and forcible conversions, has tried often to belittle the Mother’s image. Professional makers and destructors of images — the corporate world is full of this competitive specialty — try to sully her image. Western aid is sought. Social media is the latest addition to this armament. But they have all failed.

Support has come from unexpected quarters, even from the allies of the ruling formation. After the sharp attack on her last year when they stopped the Foreign Contribution Regulation Act (FCRA) permits of her congregation to receive foreign donations — and there was talk of starving the mission into submission — it was the government that had to relent. The outrage was global. And the Indian people led the protests. The FCRA permits were restored.

The Mother was remembered as a teacher on Sept. 5, celebrated in India as Teachers Day to commemorate Professor Sarvepalli Radhakrishnan, the second president of the Republic who was a teacher of philosophy at British universities, and an expositor of the Vedic culture and Brahminical texts.

People may not know in which country her native village Uskub or Skopje now falls — it was in Albania when she came to India but is now listed in North Macedonia. Anjeze Mary Gonxhe Bojaxhiu went to Ireland in 1928 to join the Sisters of Loretto at the Institute of the Blessed Virgin Mary and sailed six weeks later to India, where she taught for 17 years at the Order's school in Calcutta. She was from 1937 to 1948 at Loreto St Mary's School where she became the headmistress in 1944. For a person from a country that changed its political geography frequently, she ironically taught geography, and in the local Bengali.

Above all, the Mother, eventually sent on the path to sainthood by Pope John Paul II with whom she had shared a wonderful bond, will be remembered in India as a person who taught the value of love to a country where spirituality does not always lead to fraternity, much less to equality of the rich and the poor.

Love till it hurts, and Give till it hurts are not always understood as a pair where the charity can well be a million dollar crown in a place of worship when orphans crave protein in slums and schools.

It is a moot question if she has succeeded fully. Disparities remain, even in religious institutions, including those run by her Catholic Church. Her congregation is accused of not allowing its members to pursue higher education, even medicine, but to remain in a discipline of poverty and hard work. Other congregations are now accrediting lawyers, professors, even nurses and doctors.

But Mother Teresa of Kolkata has succeeded beyond the dreams of her admirers and followers in the Catholic Church in the way she has crossed the limits of denominations, religions, and theologies. She has held her own, and more in a country where religion is almost entirely patriarchal. There may be just two or three women in this country of more than a billion and a quarter whose name is taken with the same love and reverence as hers.

Who cares if many mix up her biography a little, and presume she was born in India? Who, but an Indian can carry a blue striped, white sari in the manner she can, not caring if she stains the “pallu,” the free end of that six-meter piece of cloth, with the dirt and sweat of a waiting child, or a gasping man in his death rattle.