St Monica reaches out to wipe away tears 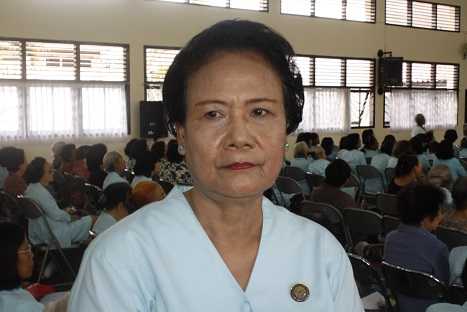 Maria Florentina Suparti spent most of her days working to make ends meet following the death of her husband from diabetes in 2001.

Her husband of around 30 years left no will or pension to help support her and their five children, who were all still studying at the time of his death.

“I went to work early every day looking for clients,” she says.

It would always be dark when she got home tired and exhausted, so all she could do was go to bed.

She made at least two million rupiah (about US$211) in commission a month from selling insurance. Luckily, she also received additional income of about 2.5 million rupiah every four months from selling rice grown in a paddy field in Sragen, Central Java that had been left to her by her parents.

“Thankfully, I was able to cover all my children’s tuition fees until they completed their education,” Suparti says.

Her children, who all found work after graduation, asked her to quit her job which she finally did in 2004, aged 66.

That year marked a momentous change for her.

She started taking part in activities organized in her parish, St Francis of Assisi in Tebet, South Jakarta. Here she met another widow, who invited her to join the Union of Catholic Widows of St. Monica (PWK St Monika).

“I felt at peace after joining the union. I realize that we are the same. We live alone without our husbands,” she says.

PWK St Monika was founded in St Francis of Assisi parish in 1982 by Angela Maria Rena Karim, a mother of three whose husband died in 1975.

The organization was named after St Monica, mother of St Augustine of Hippo, the patron saint of widows.

Meeting other widows and talking about their grief and loneliness was the main reason why she started the union.

“I and a friend of mine started it. We wanted to offer, support and give strength to other widows,” she says.

There were only nine members in the beginning. However this number grew steadily thanks to the support of bishops and priests.

Now there are more than 10,000 members covering 23 archdioceses and dioceses in Indonesia, including Bandung, Banjarmasin, Jakarta, Semarang, Surabaya, Makassar and Manado.

Each one holds monthly meetings which involve prayers, sharing and faith deepening.

For Suparti, the union has offered her a whole new lease of life.

She has served as coordinator of the union’s parish-based units in Jakarta archdiocese since 2010.

“I will always be part of this union even after my time as coordinator ends next February. It has encouraged me to love myself and others more,” she says.

For Veronica Whisnu Siwi, 67, the union has helped her meet new friends since she joined in 2000.

“They helped me reach within myself. I feel comfortable sharing things with people I have so much in common with,” said the widow from Holy Family parish in Rawamangun, East Jakarta.

She now serves as the organization’s chairwoman.

Now in its 31st year, the union continues to spread its wings and is reaching out to more dioceses. It survives with money raised through holding raffles and colleting an annual subscription from each parish-based unit.

“PWK St Monika must not die. It is a gift from God. It has dried the tears and helped so many widows,” its founder Karim, now 87, said.