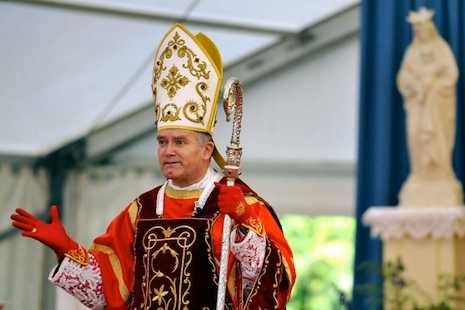 Bishop Bernard Fellay warned on October 12, “The situation of the Church is a real disaster, and the present Pope is making it 10,000 times worse.”

He said this in an address at the Angelus Press Conference, the weekend of Oct 11-13 in Kansas City.

Bishop Fellay, Superior General of the Society of St. Pius X, gave an extensive lecture on Saturday afternoon that focused on the Third Secret of Fatima, and its apparent prediction of both a material chastisement and a great crisis in the Church.This report will highlight some of the more dramatic aspects of the Bishop’s Saturday conference and his Sunday sermon.Bishop Fellay quoted in detail Sister Lucy, those who have read the Third Secret, and those who have knowledge of the Secret. He noted Sister Lucia said that if we want to know the contents of the Third Secret, read chapters 8 through 13 of the Apocalpse.” (details of the Third Secret will be contained in the upcoming November edition of Catholic Family News.) Sister Lucia’s reference to Chapters 8 through 13 of the Apocalypse is particularly chilling, since the end of Chapter 13 speaks of the coming of Antichrist.Bishop Fellay noted that Pope St. Pius X said at the beginning of his pontificate the ‘son of perdition’ may already be on the earth. He also noted the original prayer to Saint Michael of Pope Leo XIII mentions that Satan aims to establish his seat in Rome.The bishop quoted Cardinal Luigi Ciapi, the Papal Theologian of all the Popes from Pius XII to John Paul II who said, “In the Third Secret we read among other things that the great apostasy in the Church begins at the top.”He also spent a good bit of time on the famous and dramatic 1957 interview of Father Fuentes with Sister Lucia, in which she reiterated that “various nations will disappear from the face of the earth,” and that “the devil will do all in his power to overcome souls consecrated to God.”Since the ministers of God are struck with this confusion and disorder, the faithful are left to fend for themselves for their own salvation. The help that should be provided by Churchmen is not there. This is “the greatest tragedy you can ever imagine for the Church.” The times are very serious. We have to be serious about our salvation, “and to do this we are deprived of a very important element, which is the support of the [Church] authorities. What a tragedy.”He spoke of Sister Lucia’s comforting words that God has given two last remedies for us: The Holy Rosary and Devotion to the Immaculate Heart. Bishop Fellay alluded to the SSPX/Vatican drama of 2012: “When we see what is happening now [under Pope Francis] we thank God, we thank God, we have been preserved from any kind of Agreement from last year."

Full Story: Bishop Fellay on Pope Francis “What we have before us is a genuine Modernist!”