This year's elections give country a concrete chance for change 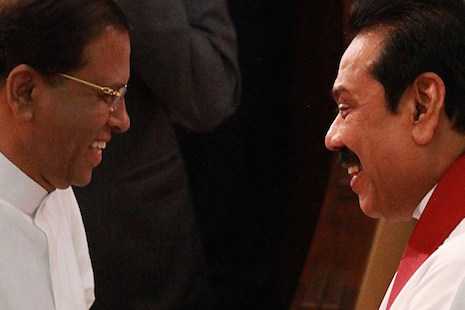 The parliamentary election held on Aug. 17 represented a seismic shift in the political culture of Sri Lanka. In the past, there was a culture of violence and corruption to the hilt. But this time, following the change of leadership that took place in January, it was clear a new atmosphere had emerged.

In the months following the January presidential election, the victors made good governance a keynote theme of the new administration. However, the government — still a minority in parliament — struggled to implement legal reform.

This August election proved a full repudiation of the former regime’s corrupt political system. The party of the controversial former president, Mahinda Rajapaksa, failed to secure a majority of seats, effectively barring him from becoming Sri Lanka’s next prime minister.

The results were celebrated in Sri Lanka and abroad as a major step forward for the embattled nation. But while the vote was just one day, it took years for the country to reach a place where such change was possible.

The struggle to change Sri Lanka’s corrupt political system was started by a well-known Buddhist monk called Venerable Maduluwawe Sobitha Thero, the chief prelate of the Naga Vihare in Colombo.

In 2013, the monk started a campaign to do away with the executive presidency. For a short period it remained the solitary call of one man, but by-and-by the campaign gained traction. Many in Sri Lanka had grown weary of Rajapaksa, who sought to install himself permanently by amending the constitution in 2010 to abolish term limits.

As the monk’s fight gained legs, it became the National Movement for Social Justice (NMSJ). Civil society, opposition politicians and ordinary people joined hands calling for electoral reform. The group demanded the abolition of the executive presidency (a constitutionally guaranteed right that critics call undemocratic), a reinstatement of term limits, and reforms to the electoral process.

When Rajapaksa decided to hold an early election seeking to solidify his hold on power with an unprecedented third term, the NMSJ made its move. The group backed the little known minister of health, Maithripala Sirisena, who stepped down from his government post to align himself with opposition groups and civil society to challenge the powerful Rajapaksa.

When Sirisena swept the election on Jan. 8, it was a silent revolution. Admitting defeat, Rajapaksa stepped down and offered the leadership of the party to the new president. But soon afterwards, he changed his mind and began campaigning across the country — holding rallies and gathering the support of his old allies to make a comeback as prime minister.

By the time of the August parliamentary elections, however, it became clear that the Rajapaksa machine had broken down. This time, he did not have the government machinery, support of local officials or police during his campaign. He was not able to garner the whole country to get enough parliamentary seats and he will remain a mere opposition member of parliament.

This election, meanwhile, was conducted by the election commissioner in the best possible manner. He had the full support of the president, who remained neutral, and got the police to maintain law and order. Civil society groups monitored the election, offering their support for free and fair elections conducted in a peaceful manner devoid of any notable violence.

Of course, not all was perfect. Politicians who agreed to root out dishonesty have instead practiced corruption to secure their seats. The public will have to bear with these bad men and our hope is that they would be dealt with in the corruption investigations that have already commenced.

There are other candidates who were elected whose past records are not acceptable to peace-loving people. Some voters have fallen prey to fear mongering and popularity contests.

Will this be a barrier to the full realization of rule of law in the country and reconciliation? Will these leaders go with divisive politics when dealing with the Tamil question? I do hope that this will not be the case and they will act differently.

Regardless of some problems, the overall results indicate that the January reforms have stuck and the defeat of Rajapaksa has served as a clarion call for change. Those who lost spoke of the Liberation Tigers of Tamil Eelam (LTTE) or terrorism coming back to the country and claimed the security of the country is at stake.

But the results show that most people did not fall for such assertions and the majority have opted for a peaceful settlement, for democratic values, and to do away with hate politics.

The new political culture should be promoted in all corners. There was no equality during the Rajapaksa regime, but now the situation is improving. Press freedom was a mere wish, but this has been assured since the January elections. Today, there are no white-van abductions as there were under the previous regime.

There is also an adequate opportunity for reconciliation; the Lessons Learnt and Reconciliation Commission (LLRC) proposals should be implemented.

The rejection of extremists from Bodu Bala Sena, a radical Buddhist party in the south, and the pro-LTTE former cadres in the north should be seen as positive elements.

Indeed, the very process of conducting the election in a free and fair manner indicated the majority of the people of this country want to enjoy freedom.

There is an opening now to act in a peaceful manner and in this regard all the religious leaders must put their heads together to work hand-in-hand with the authorities. This was not possible under the earlier regime. The issues of justice, peace, and the sufferings of the poor and the victims of the war should be addressed. The ethnic hatred should be dispelled and harmony promoted. The problems facing ethnic minority Tamils should be settled.

Though the economy is an important element in the development of the country, it is time to address not only the needs of the elites but those of the poor.

Now there is a greater chance for ethical standards to be applied in economics, politics, and ecological issues.

Father Reid Shelton Fernando is a university lecturer and the former chaplain of the Young Christian Workers movement. He is well known in Sri Lanka for his writings and commentaries on social and political issues. He is a human rights activist and submitted a list of disappeared priests’ names before the LLRC commission.