Sirisena promises to work with the UN, avoid future bloodshed 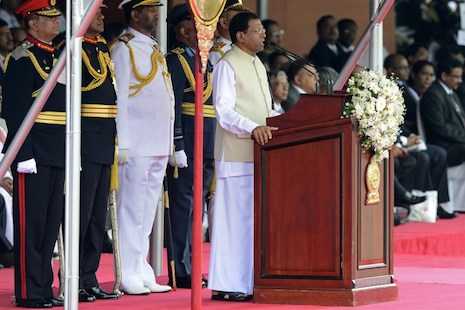 By Amal Jayasinghe for AFP, Colombo

In an address to the nation to mark Sri Lanka's 67th anniversary of independence, Sirisena and his ministers also pledged never again to allow the "land to be traumatized by the shedding of blood of innocents".

In a major sign of rapprochement, the country's main minority political party, the Tamil National Alliance (TNA), attended the national day celebrations for the first time in decades.

"We have not participated in national day events in the recent past. There is a change of attitude and approach of the new government," said TNA lawmaker MA Sumanthiran. "We recognize that and we want to reciprocate."

The new president shed the usual display of weapons and fly past by the airforce and settled for a military parade involving four officers and 96 soldiers at a simple ceremony outside the national parliament.

In last month's election Sirisena defeated long-time strongman Mahinda Rajapaksa, who fell out with the West over allegations of wartime rights abuses by the security forces.

"We have to address our foreign policy problems. We will follow the UN charter and abide by the UN values," Sirisena said in a nationally televised address.

The US and the Commonwealth have already welcomed the new government's approach to work with the international community, a departure from the previous confrontationist stance.

"The United States looks forward to partnering with the Sri Lankan people to address the challenges and help Sri Lanka realize its true potential," US Assistant Secretary State Nisha Biswal said in a statement Wednesday at the end of a visit to Colombo.

Rajapaksa enjoyed huge support among majority Sinhalese voters after overseeing the end of a separatist war by ethnic Tamil rebels in 2009, but critics say he failed to bring about reconciliation in the years that followed.

Troops under Rajapaksa demolished war cemeteries of the Liberation Tigers of Tamil Eelam (LTTE) and banned Tamils from commemorating their war dead.

In contrast, Sirisena's government used the national day to pay respects to all victims of the decades long separatist war, which the UN says claimed at least 100,000 lives between 1972 and 2009.

Rajapaksa had also refused to cooperate with a UN-mandated investigation into allegations that government forces killed up to 40,000 Tamil civilians while defeating the separatists.

"In 2009, we ended the war because LTTE guns were silenced by the guns of our troops," Sirisena said.

"But, since then, we have failed to heal the wounds of war and win the hearts of all our people."

"Reconciliation will be a priority for my government. We want to ensure a new political culture to place our nation among the important members of the international community."

"We must unite the (Tamil) north and the (Sinhala) south," Sirisena said, referring to the Tamil-dominated northern province which suffered an economic embargo and travel restrictions even after the end of the war.

Sirisena has lifted both the economic embargo and travel restrictions on the north since coming to power. He has also offered to return Tamil-owned land taken over by the military to set up businesses run by the security forces.

Shortly before his speech, Sirisena and his ministers took a pledge to ensure the country did not return to war.

"We pledge our collective commitment to ensure that never again will we allow this land to be traumatized by the shedding of blood of innocents," according to the pledge which was read out on stage by three schoolchildren in Sinhala, Tamil and English.

Sirisena's new government has already agreed to establish a domestic probe into the war crimes allegations. The previous administration had resisted such a move, insisting not a single civilian was killed by its troops. AFP