Hopes expressed for a visit to those affected by civil war 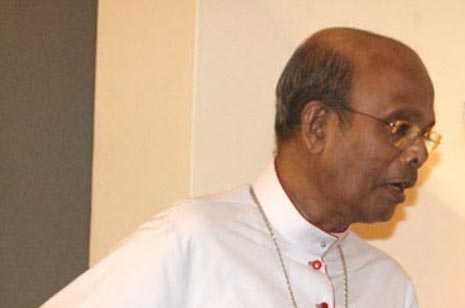 Pope Francis' announcement of a papal visit Sri Lanka next year has been received with delight.

The pope made the announcement to media yesterday during a flight back to Rome after his Holy Land visit. He said that he also plans to go to the Philippines on the same trip.

“It is a fine occasion as only Pope Paul VI and John Paul II visited our motherland in 1970 and in 1995,” said Bishop Peiris.

During this month’s ad limina meeting, the pope urged the bishops of Sri Lanka to continue their role in working toward reconciliation between the government and the country’s minority Tamils living in former conflict areas.

“After many years of fighting and bloodshed, the war in your country has finally ended … though the war has ended, you rightly note that much work needs to be done to promote reconciliation, to respect the human rights of all the people and to overcome the ethnic tensions that remain,” Pope Francis told the Sri Lankan bishops.

Bishop Peiris said that reconciliation was a major priority for the country.

“Tamils have wounds from the war and the Sinhalese should win the hearts of Tamils for reconciliation,” he said.

“We have continuously prayed for the Holy Father’s visit and it is very important for our people after such a long war,” said Gajendranath Paarthiv, a Tamil living in Vavuniya. “I hope he will come to visit the war affected people.”