But even if controversial legislation was repealed, abuses may not end, says Catholic priest 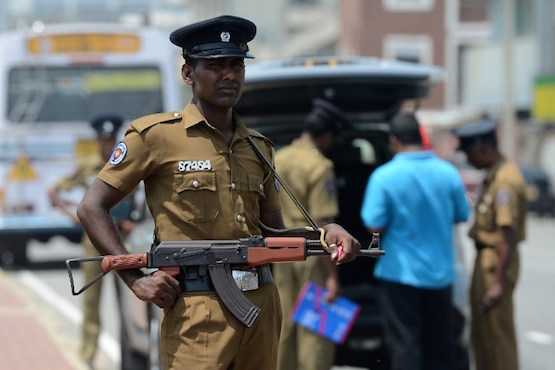 A Sri Lankan police officer stands guard while colleagues inspect a vehicle at a checkpoint in Colombo on March 8. (Photo by AFP)

"Around 250 detainees are believed still to be held under the PTA. The government has pledged to expedite cases, but there has been little movement in the past six months," stated the report.

Hundreds of civic rights activists including priests and political prisoners have been detained under the Prevention of Terrorism Act, which was first enacted in 1979 that gives police broad powers that activists say have been abused.

Father Nandana Manatunga, head of the Kandy Diocesan human rights office, says the authorities have abused the PTA who have continued to use it against Tamils and other minorities.

"Torture continues and police brutality more than ever," said Father Manatunga who suspects that even if the PTA were repealed, not much would change.

"The Prevention of Terrorism Act could be replaced with another piece of legislature with another name but basically the same laws may continue," Father Manatunga told ucanews.com.

"The rise of nationalist campaigns over the recent months continue, so the government is slow in respecting the rights of the Tamils and other minorities," said the priest.

Chandrapala Kumarage, attorney and former chairman of the Rule of Law Committee of Bar Association of Sri Lanka, agreed with the British reports recommendations on the PTA.

"It is high time for the Sri Lankan government to repeal the PTA in line with the anti terrorism laws in UK where any person is arrested the detention is then supervised by judiciary of that country who would also oversee any extension of detention if needed," said Kumarage.

Much of the tension in the country relates back the country's civil war which ended in 2009 when government forces defeated Tamil Tiger rebels, who had been fighting to carve out a separate state for ethnic minority Tamils.

According to UN statistics, up to 40,000 Tamil civilians were killed in the final stage of the three decades-long war.

Activists say that a lasting peace is not yet in sight and Tamils remain gravely concerned for their future.

"The war is over but there are disagreements, weaknesses and differences of opinion among the main communities," said Kumarage.

"Demilitarization is an urgent need at the moment," he said. "It is in the interest of everyone to return the northern lands (where Tamils are the majority) to the people and withdraw the military."

The UK report recognized that positive steps have been taken by the Sri Lankan government such as its passing of the Right to Information Bill and progress made in murder and disappearance cases.

The report said that the island nation's new constitution was a good opportunity for the country to introduce improved human rights protections.

"The human rights situation in Sri Lanka continued to improve between January and June 2016. However, much remains to be done for Sri Lanka to fulfill the commitments made in Resolution 30/1 at the UN Human Rights Council in October 2015," said the report.