Government must enforce rule of law to prevent escalation 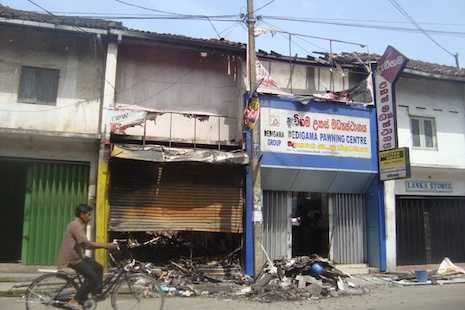 Muslim-owned shops in Aluthgama that were destroyed by a hardline Buddhist mob during riots that killed four people on June 15.

The anti-Muslim violence in Aluthgama on June 15 has once again highlighted the vulnerability of Sri Lankan society to ethnic and religious polarization.

Sri Lanka’s own history of Sinhala-Muslim riots of 1915 and the Sinhala-Tamil riots of 1957 and 1983, and international experience, shows that inter-community relations are fragile.

The violence in Aluthgama followed a sustained hate campaign against the Muslim community in the area and elsewhere in the country, which has yet to be countered by either legal or political means.

According to the report, over the 12 month period between January and December 2013 there were at least 241 anti-Muslim incidents. Of those incidents 51 were violent, involving either physical violence against individuals or destruction of property.

The attack on Muslim-owned shops and houses in Aluthgama last month was by people who came from outside for the most part. This alone shows that it was an organized effort, which resulted in the deaths of at least four people, 80 people injured and numerous shops and houses damaged or destroyed. The actual casualty figures may be more.

Police have questioned the leaders of the Bodu Bala Sena (BBS), a Buddhist extremist organization, over speeches made before the riots. They have also taken 117 people into custody, with 85 of them being produced before courts and 25 released on bail.

But these steps are unlikely to reassure Muslims and other potential targets, so long as extremist groups are given a free hand to mobilize their members for action, at the time and place they choose.

The government appears to have woken up to the gravity of the problem posed by repeated attacks on the Muslim community. The police have announced that they will not permit meetings that cause ethnic or religious hatred to be generated. This new policy is to be welcomed as long as it is implemented in fact, and not simply restricted to rhetoric.

The police have become a scapegoat for permitting the BBS to hold the public rally that ended up in anti-Muslim violence in Aluthgama.  However, there is still no sign that the government will empower police to arrest and prosecute those who instigated it.

The upsurge of anti-Muslim sentiment, and its open manifestation among sections of the ethnic majority population, has come as a shock to all Muslims. They felt that their support for the government during the war, and their opposition to the division of the country, should have won the support and gratitude of the nation. Now they have learned that they are vulnerable to attack by mobs that act with impunity while the police stand passively by.

There have been instances where the identities of the perpetrators have been noted, but not one has been arrested. In one instance a Muslim government minister, Rishard Bathiudeen, himself gave the information personally to the police, but no action was taken.

In the aftermath of the Aluthgama violence there are four commitments that the government needs to provide, if it is to restore their confidence.

The first is to affirm the pluralistic and multi-religious nature of the Sri Lankan polity.  Since the end of the war the government has been propagating a contrary message of nationalism, in which the position of the ethnic majority has taken pride of place.  While this may possess a certain political logic, it is detrimental to national unity.

Second, the government needs to compensate all who lost their homes and businesses due to the violence.  This is incumbent on the government, as it contributed to it through its negligence.

Although the government has sanctioned a sum of Rs 200 million (US$1.5 million) for reconstruction and deployed the army for the purpose, this has not been satisfactory either in terms of the financial outlay or in the appropriateness of getting the army to do the job.

The reconstruction of houses and shops should have been done after consultation with the affected community, and not imposed upon them. A fearful community that feels that the state’s security apparatus has not protected them is unlikely to view soldiers entering their homes with equanimity.

Third, the government must improve on its performance in terms of the rule of law. Since the end of the war, Sri Lanka has witnessed a gradual decline in it and an increase in levels of impunity often reportedly due to political patronage at national, provincial and local levels. This trend needs to be arrested immediately and the guilty not shielded from facing due legal processes.

Finally, an independent inquiry is required to determine what transpired in Aluthgama. Such an inquiry panel may be selected with the participation of the Minister of Justice who is himself a Muslim and who has complained of misrepresentation of the causes of death of some of the victims of the riots.

The judicial medical officer who submitted the postmortem report on one of the victims killed during the Aluthgama violence has been summoned to court after his report was disputed. In these circumstances only a credible fact-finding body will be able to dispel the doubts as to what really happened at Aluthgama and who was ultimately responsible.

Thus far the Muslims have chosen the path of engagement as their way of conflict resolution. They have stayed within the framework of overall government policy even while asserting their rights. This is because the Muslims have decided that they are going to live side by side with the other communities in Sri Lanka and there is no desire for separation on their part.

Although the Sri Lanka Muslim Council presented a document to the UN Human Rights Commissioner giving details of incidents of harassment of Muslims, it continues to remain a partner of the government. However, if pushed too hard and for too long, there is a possibility of radicalization and internationalization of the conflict that will pose even greater difficulties.

Jehan Perera is a Doctor of Law from Harvard University and serves as executive director of the National Peace Council of Sri Lanka.