Sri Lankans to use prayer power against dengue epidemic A file image of a Sri Lankan municipal worker fumigating to curb mosquito breeding in the Colombo suburb of Wattala on June 29, 2012. (Photo by Ishara S.Kodikara/AFP)

Cardinal Malcolm Ranjith of Colombo has announced a week of prayer and fasting to help curtail the spread of dengue fever on the island nation.

"Let us also invoke the blessed Mother and the saints so that they may intercede for us in our need," said Cardinal Ranjith who asked local Catholics to pray and fast from July 15–23.

This year, Sri Lanka has been badly affected by dengue of which symptoms include fever, headaches and rash.

More than 220 people have died from the disease and over 71,000 dengue patients have been reported in the past six months.

"Along with prayer, acts of special charity to help needy persons should be done as should a campaign to clean up such environments where mosquitoes breed," said Cardinal Ranjith.

Dengue is spread by mosquitoes who thrive in areas with standing water, including puddles, water tanks, containers and old tires. Lack of reliable sanitation and regular garbage collection contributes to its spread, according to the International Association of Medical Advice for Travelers.

Cardinal Ranjith also asked Catholics to engage in fasting and penance "for our own weaknesses and sins."

He furthermore recommended Catholics organize celebrations for a novena to St. Sebastian who is known to be strong intercessor on behalf of the sick.

There are two peak seasons for dengue in Sri Lanka, October to December and May to July. 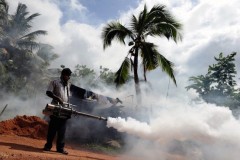