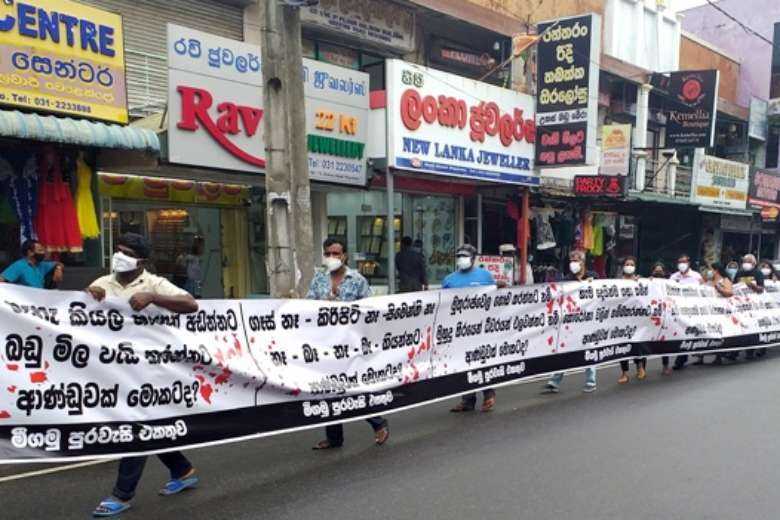 A street demonstration by fishermen, women and Easter attack victims against a new gazette notification to acquire their lands for protection of wetlands in Negombo, Sri Lanka, on Nov. 9. (Photo: UCA News reporter)

Priests and nuns joined a street demonstration by hundreds of fishermen, women and Easter attack victims to oppose a new gazette notification to acquire land around the ecologically sensitive Muthurajawela wetlands.

The demonstrators also demanded justice for the victims of the 2019 Easter Sunday bombings.

The Catholic Church has filed a writ application before the Supreme Court seeking cancellation of the gazette notification. “The acquisition of the lands will be a great disaster for the people,” said Father Jayantha Nimal, parish priest of St. Nicholas Church in Bopitiya.

Addressing the demonstrators on the streets of Negombo on Nov. 9, he urged rulers not to deprive the people of their right to live freely. The acquisitions of land around the wetlands will cause great damage to the environment as well as the fishing community, Father Nimal warned.

“We ask the government to listen to the voice of the people,” he said.

Father Ranjith Terry, the parish priest of St. Mary's Church at Pitipana in Negombo, urged people to remain united in the fight for justice.

Romel Fernando, who participated in the demonstrations, said the government wanted to undermine the activities of the priests and rights activist

Human rights activist Brito Fernando said: “We took to the streets to tell the government that we would not remain silent while our lands and sea are being taken away.”

The government’s stated purpose is to protect the Muthurajawela wetlands, named one of the 41 internationally important wetlands in the country by the Asian Wetland Inventory of 1989.

According to a study done by the International Union for the Conservation of Nature, the zone consists of 209 species of animals along with 194 species of trees, 40 species of fish, 31 species of reptiles, 102 species of birds and 48 species of butterflies. It has 18 out of 22 mangrove species.

Romel Fernando, who participated in the demonstrations, said the government wanted to undermine the activities of the priests and rights activists.

“God has always been on the side of the oppressed and poor,” Fernando reminded rulers.

Meanwhile, hundreds of priests and nuns observed a silent protest near the Supreme Court in Colombo in support of Father Cyril Gamini while his application was being heard on Nov. 8.

Father Gamini had filed a fundamental rights application to prevent any attempt being made by the Criminal Investigation Department to arrest him after summoning him to record a statement regarding his comments on the investigation into the Easter Sunday bombings.