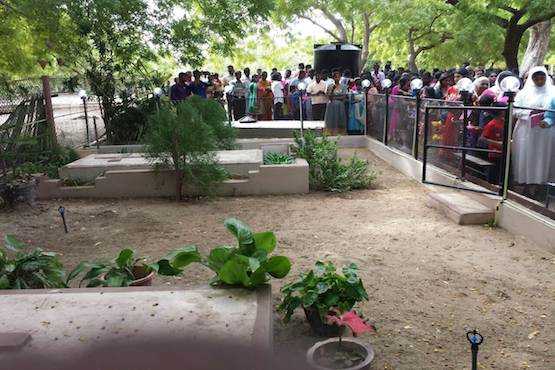 People pray at the tomb of the martyrs at Thottaveli in Mannar, Sri Lanka. The site of the martyrdom has become a popular pilgrimage spot especially on All Saints Day Nov. 1. (ucanews.com file photo)

In 1544, King Cankili of Ceylon murdered 600 Hindus who converted to Catholicism when they refused to recant their new-found faith. Now the Vatican is being asked to consider their case for official martyrdom.

The Queen of Martyrs Church now sits on the site of the slaughter and has become a popular pilgrimage spot. Father Emmanuel Sebamalai, the parish priest, said that there are two mass graves located in the church compound belonging to the martyrs.

The massacre is significant because it is the first instance of martyrdom in South Asia and which bolstered the spread of Catholicism in the country, the priest said.  Even now, the area where they lived, Mannar, comprises the highest number of Catholics in what is now Sri Lanka with over 51 percent of locals belonging to the religion. The country elsewhere is predominantly Buddhist.

Local people have formed the "Martyrs of Mannar Welfare Organization" to promote their cause with the Vatican and introduce the martyrs to a new generation.

"There are 23 members in the committee," said Anthony Croose. "Our main focus is to promote the martyrs as saints and also help the local community to grow spiritually. We have organized some talks about the martyrs and their history."

The committee is currently in the process of collecting the names of the martyrs with the help of Jesuit priests from India but so far they have been unable to ascertain their names despite trawling through historical records, according to committee member Father S.V.B. Managalarajah.

Records of letters sent by St. Francis Xavier indicate their martyrdom and in his correspondence to the Portuguese authorities had requested for an expedition, Father Managalarajah said. St. Francis Xavier, a Jesuit missionary from Europe first came to India, then Sri Lanka, Malaysia and Japan. He died on Shangchual Island near China in 1552.

Bishop Kingsley Swamipillai of Mannar said that Pope Francis was likely to make an exemption in this case and overlook the need for names since he is a "daring" pontiff.

"I pray every day as an individual and with my family for the canonization of my ancestors," said Anthony Arulselvi while holding the prayer book of the Mannar Martyrs.

"When I was small, I saw people collecting pieces from bones that belonged to the martyrs believing they could cause miracles. Even my grandparents collected bones like this," said Arulselvi, 40, a catechist at Queen of Martyrs Church in Thottaveli.

"We have a day to commemorate these martyrs every year in July because they were all slain in July 1544. Their decedents, who are widespread in Mannar Diocese, get together to pay respect to their martyrs," the catechist said.

"Our only hope is to promote them as saints. Many of the villagers have prayed to them for miracles especially illnesses and have got cured," said Arulselvi.

Bishop Swamipillai said the feast day of these martyrs is commemorated every All Saints Day Nov. 1 when a special Mass is celebrated to honor them.