Christians, Buddhists and Muslims hold services to show solidarity with the Chinese 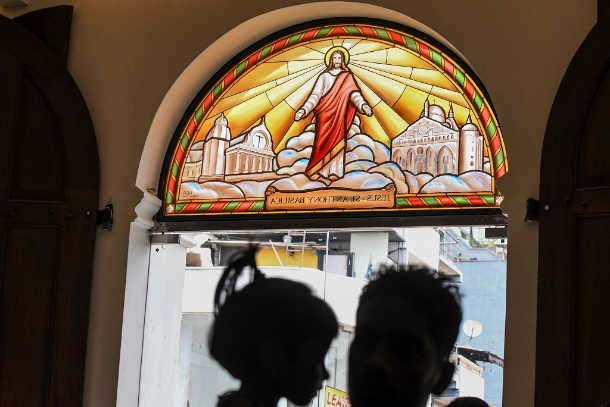 Christians pray for a quick end to the spread of the COVID-19 coronavirus during a special Mass at St. Anthony's Shrine in Colombo on Feb. 15. (Photo: Lakruwan Wanniarachchi/AFP)

Buddhists, Muslims and Christians in Sri Lanka have offered prayers for China and its people who have been affected by the COVID-19 coronavirus, calling for a swift end to the epidemic.

Catholics held a special Mass at St. Anthony's Shrine in Kochchikade on Feb. 15 when Cardinal Malcolm Ranjith offered prayers to protect their Chinese brothers and sisters.

"If all the leaders of the international community come together and take care of the safety of the entire world rather than just their own advancement, we will be able to prevent these catastrophes," said Cardinal Ranjith in his address to the faithful at the shrine, the scene of one of the deadly Easter Sunday bombings last year.

"On the road to human progress, due to the damage done to nature, natural disasters can bring more and more destruction to the world."

Sri Lanka has confirmed its first case of the coronavirus, a 43-year-old Chinese woman from Hubei province who arrived in the country as a tourist.

The death toll has climbed to 1,775 with more than 71,000 infections as of Feb. 17. The number of patients has increased around the world and tens of thousands of people are under observation.

Some 33 students who were studying in Wuhan, China, the epicenter of the outbreak, have been brought back to Sri Lanka. They were taken to Diyatalawa Army Hospital for a special check-up and kept there for a 14-day quarantine.

Religious leaders have also called on people to avoid public gatherings and called for public events to be canceled or postponed until the disease has been brought under control.

Muslims offered special prayers to show their solidarity with countries affected by the COVID-19 outbreak and to invoke the blessing of God for the well-being of people at Colombo’s Dawatagaha mosque on Feb. 14. Chinese ambassador Cheng Xueyuan attended the event.

Nuwan Harshana, who has studied in China, said the two countries enjoy a strong, long-standing friendship.

"China and Sri Lanka are good friends and partners who always support and help each other," said Harshana, who intends to pursue higher studies in China.

China has earmarked US$1.4 billion for reclamation activities and infrastructure facilities of the Port City project. A complex will be constructed at an additional US$15 million.

Lak Vijaya is the largest power station in the country, built at a cost of US$1.34 billion. Funding for the construction of the station was provided by the Chinese government.

Almost all the money China has poured into the island nation has been in the form of loans at commercial interest rates. Furthermore, laborers and subcontractors working on the projects are all Chinese and use Chinese materials.

"All these projects are controversial constructions that the government describes as technological marvels but critics say are part of a crippling debt trap," said Harshana.

Harshana attended the Buddhist service to show solidarity with the countries affected by the outbreak.

The Sri Lanka-China Journalists' Forum engaged in special Buddhist religious ceremonies with the participation of officials to invoke blessings for people affected by COVID-19.

"We always remember the support given to us by China on many occasions when Sri Lanka faced calamities such as the tsunami, floods, landslides, war and terrorist bombings," said the forum.

"We wish China all the very best and hope that the great Chinese nation will return to normalcy soon."

A special passenger terminal has been set up at Bandaranaike airport to check all passengers arriving in Sri Lanka. Four scanners have been installed to identify possible carriers of the coronavirus.