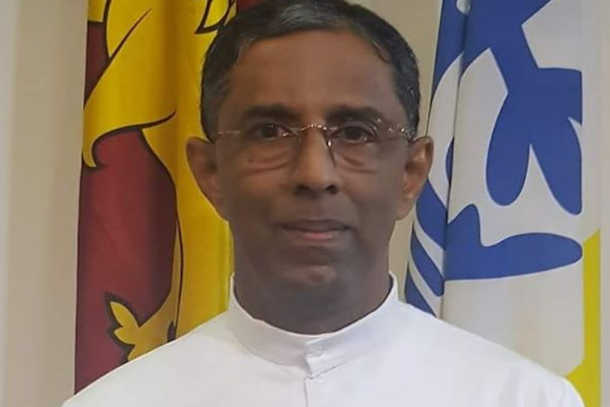 A Tamil priest has been appointed an auxiliary bishop in Colombo Archdiocese in a move expected to improve north-south relations in Sri Lanka.

Father Anton Ranjith Pillainayagam, 53, will serve as the third auxiliary bishop of the archdiocese. The bishop-elect, who has a background in education, is fluent in Tamil, Sinhala and English.

His episcopal consecration will be held at St. Lucia's Cathedral in Kotahena on Aug. 29.

Father Ranjith was appointed head of the Tamil section at St. Joseph Vaz Deva Dharma Nikethanaya, an institution of theological sciences, in 2006.

Sri Lanka’s 26-year civil war had a significant impact on the relationship between people in the north and south.

"He will have a good opportunity to re-establish the broken brotherhood of north and south. I see this as a rare opportunity for the Church to create a bridge between the Sinhalese and Tamils in the north," said R. Shanmugam, a Tamil Catholic teacher.

In 2009, the government declared the end of the war with the Liberation Tigers of Tamil Eelam, also known as the Tamil Tigers, after killing their leader Velupillai Prabhakaran.

The war began in 1983 with Tamil militants seeking to carve out a separate Tamil homeland in the country’s north and east.

The 26-year civil war caused significant hardships for the economy of the country, environment and population.

According to the UN, the conflict claimed the lives of at least 40,000 civilians, while independent reports put the figure at over 100,000.

Father Crispin Leo said the new bishop would be an asset to the archdiocese by contributing his youthful and visionary ideas for an active and fruitful missionary church.

Father Lal Pushpadewa Fernando, director of the National Commission for Social Communications, said Father Ranjith is very straightforward and a man who can handle many tasks.

"Most of his life experience is in education. He is especially responsible for the discipline of children, guiding their spirituality and their formation," said Father Fernando.

Ranil Abesuriya, who studied under the new bishop, said Father Ranjith helped them to recognize the need to reach out and meet the needs of multicultural and multi-ethnic communities.

"There is a large Tamil Catholic community in Colombo and they need a shepherd to look after them, fulfilling their spiritual needs," said Abesuriya.

There are about 1.2 million Catholics in Sri Lanka representing around 6 percent of the population.

Father Ranjith was ordained on Sept. 16, 2000 in St. Lucia Cathedral in Colombo. Just after his ordination, he joined the staff of St. Peter's College in Colombo where he worked until 2004.

He completed his primary and secondary education in Colombo and Jaffna. He studied philosophy at St. Francis Xavier Major Seminary in Jaffna and theology at the National Seminary of Ampitiya in Kandy. He obtained a bachelor’s degree in mathematics from the University of Jaffna and a master’s degree in education from the University of Middlesex in the UK.