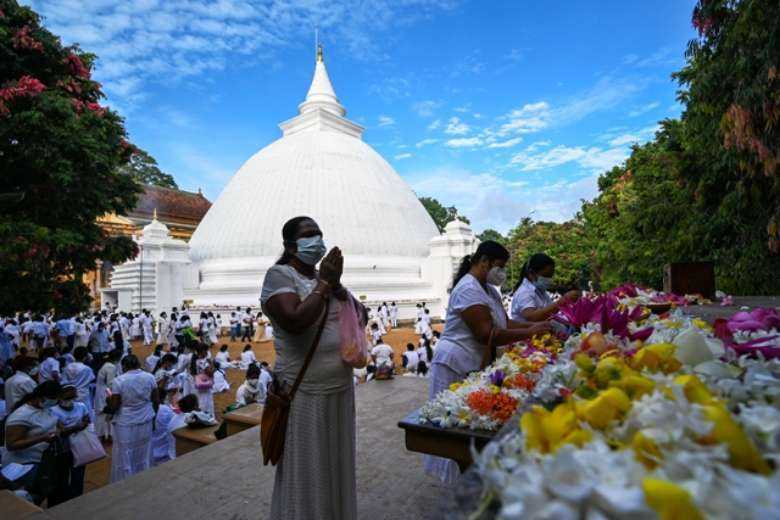 Buddhist devotees offer prayers at the Kelaniya Temple during the Vesak festival in Colombo on May 15. (Photo: AFP)

Christian and Muslim clergy joined Buddhists in Sri Lanka to celebrate  Vesak or "Buddha Day" at Galle Face Green in the capital Colombo where protests continue demanding the resignation of the president and the government.

Buddhists celebrate Vesak to commemorate the birth, enlightenment and death of Lord Buddha.

Ayodaya Semini, a Buddhist university student, said she had never witnessed Christians and Muslims in such large numbers at the Buddhist festivities that included sermons, ceremonies with Vesak lanterns and Buddhist flags on display.

“A number of Catholic nuns lit Vesak lamps and prepared decorations and food at the site...many young Muslims joined in preparing decorations and distributing food,” Semini said adding that it was an expression of religious unity "not in words but in deeds."

Many at the site said seeing people of different religions sitting together to listen to the Buddhist Pirith chanting and homilies of the Buddhist monks was a sight to behold.

“No doubt, a new country will be born,” exclaimed one of them in an apparent reference to the ethnic wars that the island nation has witnessed in the past 26 years or so.

An emotional nun from Colombo Archdiocese who requested anonymity said: “It brings tears to my eyes to see that all religious faiths are together at the site for more than one month.”

The Vesak festivities were low-key for the past three years due to the Easter Sunday terror attacks on churches in 2019 and the Covid-19 pandemic.

Galle Face Green, the center of Vesak celebrations, has been witnessing protests since April 9 demanding that President Gotabaya Rajapaksha quit along with the government.

A large number of ordinary people from different parts of the country arrive daily to participate in the day and night demonstrations.

The protesters were attacked by pro-government supporters after Mahinda Rajapaksha resigned as prime minister. Some159 people have been arrested so far for assaulting protesters at Galle Face Green and causing damage to state and private property, police said.

The political crisis is fueled by massive anti-government protests due to the economic crisis in Sri Lanka.

Cardinal Malcolm Ranjith greeted people on the occasion of Vesak: “May the great message preached by the Lord Buddha to the world about the spiritual power be further strengthened in the country,” he said.

"We have demonstrated our strength as citizens to overcome challenges. People have a deep spiritual power to rally for a just and religious society," the cardinal said.

Many Buddhists dressed in white observed Ata Sil (the eight precepts to foster good conduct and develop self-discipline), participated in meditations and offered food and drinks to visiting pilgrims from across the country.