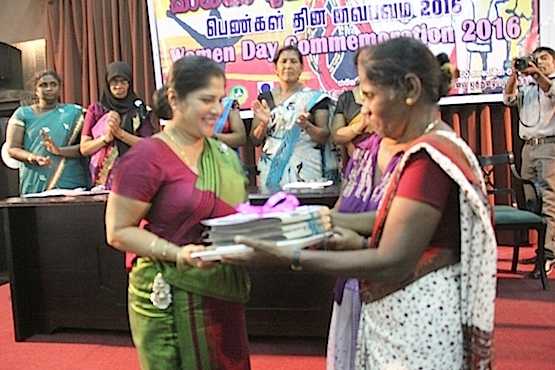 A woman activist hands over a formal proposal for a new national women’s policy to Chandrani Bandara, minister for women and child affairs, left,  during a meeting in Colombo March 29. (Photo by ucanews.com)

Women activists want the government to introduce a new national policy on women that will address the large disparity in income for the work they do and ensure that they are part of the decision making process in nation building.

Women who work in tea states, in fields and in the fishing industry get low wages compared to men and their services are not recognized, said Lavina Hasanthi, the women project coordinator of the National Fishery Solidarity Movement

Women are a majority in Sri Lanka, representing 52 percent of the country's 20.5 million people.

"After a hard day, women have to return with low wages," said Hasanthi, who addressed a March 29 women's gathering in Colombo to hand over their proposals to the government to introduce a new national policy for women.

As the country has no such policy, women face workplace related difficulties, discrimination and exploitation economically, socially and in politics, she said.

"When the government provides professional training, it should be given to men and women equally," she said.

"Women should have more say in policy making so that the government can secure the social dignity of women," she said. "This should also be considered in a new national policy for women."

More than 300 women, including Catholic nuns, from 13 districts attended the meeting to hand over their proposal to Chandrani Bandara, minister for women and child affairs.

Charity Sister Noel Christine who attended the event said that it is "an urgent need" to enable women to participate in the decision making process regarding developmental projects.

Many development projects take place in the country but it is only men who make policies and decisions, said the nun. "We can't really benefit from such projects."

Daharmarajini, who lives in a camp for internally displaced people, said many women, especially widows, head families and are the breadwinners as the men were killed in the civil war. Yet there is no government structure to ensure equality among men and women.

Bandara promised to take the proposal into consideration and said that her government had already passed a bill in parliament to increase women participation in politics.