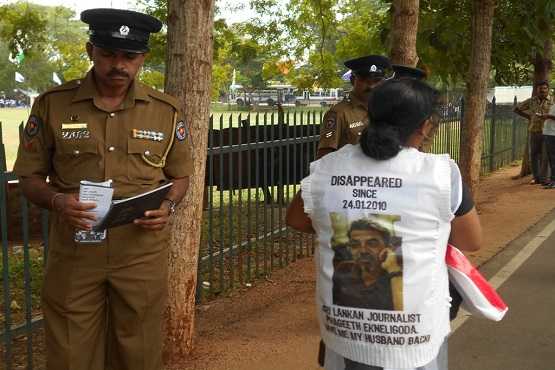 Sandya Ekneligoda campaigns for justice for her missing journalist husband. She won the U.S. International Woman of Courage Award on March 30 for her activism. (ucanews.com photo)

A Sri Lankan woman has been awarded by the United States for her tireless pursuit of justice for her husband, a well-known political cartoonist and journalist, who disappeared in January 2010.

Sandya Ekneligoda won the International Women of Courage Award on March 30. The award recognizes women who have fought for human rights and justice often at great personal cost.

Prageeth Eknaligoda, her husband, was abducted after writing several articles that were critical of then President Mahinda Rajapaksa. Since then, Eknaligoda has made 90 court appearances and traveled to support other people whose family members also disappeared.

Forced disappearances were commonly used during Sri Lanka's 30 year civil war as a way to silence people who the government considered enemies or who were too vocal in their criticism.

Rights activist Charity Sister Christine Fernando also commended Eknaligoda. "Whenever I protest human rights violations she is always there and she always works for social justice. She stands up for victims and for the voiceless people," the nun told ucanews.com.

"Eknaligoda is in vulnerable situation, raising two sons without her husband, but she never gave up her struggle. I am really fortunate to stand side-by-side with her and protest against human rights violations," she said.

Seetha Ranjani, Convener of Free Media Movement said that Eknaligoda managed to pull in the support of media organizations and civil society groups. "She handed over several petitions to the human rights commission, embassies and even went to U.N. to seek justice," said Ranjani.

"Eknaligoda challenged the government and filed Habeas Corpus in the court. She was never silent and fought with courage," said Ranjani.

U.S. Ambassador to Sri Lanka Atul Keshap said in a statement on March 29 that Eknaligoda represents the dedication and perseverance of women from all ethnicities across Sri Lanka who are seeking information about their missing loved ones.

"The American people support their efforts as a step towards a brighter future of truth, reconciliation and lasting peace for all Sri Lankans," said Keshap.

This is the second time a Sri Lankan woman has won the award. Jansila Majeed, a Sri Lankan Muslim rights activist, was honored in 2010 for her hard work to unite Muslim and Tamil communities.

The 13 award-winners this year have worked in diverse areas such as child marriage, gender-based violence, human trafficking, improving interfaith relations and preserving the environment.  They will visit the U.S. to speak about their lives and what inspired them to act.