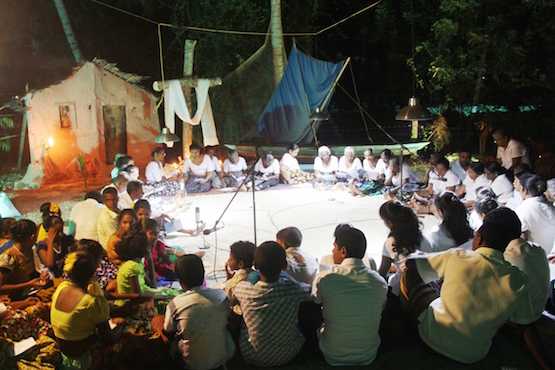 A file photo of Sri Lankan Catholics singing "Pasan"(songs of sorrow) during Lent in a village near the city of Negombo. (Photo by ucanews.com)

Catholics in Sri Lanka conducted a Way of the Cross devotional event as part of a protest against a controversial port project in Colombo.

About four hundred Catholics, including priests and nuns, attended the Way of the Cross event in the city of Negombo, March 22 and urged the government to stop the US$1.4 billion Colombo Port City project and protect the environment.

The Chinese-backed project was suspended in March last year due to regulatory and environmental concerns. The government announced this month that the project would resume.

"By destroying the environment, the creation of God is harmed," said Fr. Iddamalgoda.

"Those who participated in the Way of the Cross were really inspired by the teaching of Pope Francis on the environment," he said.

"They reflected how they can practically see the love of God through the environment."

In the pope's June encyclical on the environment, Laudato si', the pontiff pointed out the connection between environmental destruction and unjust economic and political policies that penalize the poor.

Nimalee Fernando, a parishioner from Munnakkaraya, said those attending the Way of the Cross shared on each station about man-made disasters that were brought about through the destruction of the environment.

She said that current Sri Lankan Prime Minister Ranil Wickremesinghe had promised to halt the project during his electioneering before coming to power. A promise that the prime minister has been unable to keep, said Fernando.

It is feared that the port's construction will also displace about 50,000 families living on the coast.

The Way of the Cross is a traditional part of Lent for Sri Lankan Catholics and it helps to reflect and find inspiration to change their life for the better.