At 400-year-old shrine, Tamil and Sinhalese Catholics worship together but unity has been tested 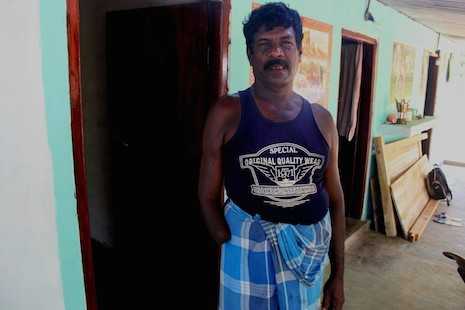 'There is a huge demand for artificial limbs in my village,' says Mariathasan Reval, a Tamil villager who lost his left hand in a bombing raid in 2009. (Photo by Quintus Colombage)

All Mariathasan Reval needs to do is rub the stump on his right arm to remind him of the heavy price he, like many Sri Lankans, paid during the country's 26-year civil war.

When he fled his home in Mannar at the height of the war, he saw little hope of returning. For several years he bounced back and forth between refugee camps and the homes of relatives, walking for days through dense jungles and risking his life traversing the dangerous lands in the north.

But post-war Sri Lanka has brought the 55-year-old back to Mannar with his wife and children. Reval, a Tamil, operates a small business at the Marian shrine of Our Lady of Madhu while finding odd jobs to earn extra income.

Some days, he'll gather firewood to sell to Madhu pilgrims. He also earns extra cash by renting two rooms in his small house, which was built last year through funding provided by the Indian government.

Through tears he recalls how a bomb in 2009 killed his daughter and mother and left him disfigured. Reval is among the 30,000 severely disabled civilians in desperate need of government assistance, according to civil rights groups.

"There is a huge demand for artificial limbs in my village and all the severely disabled have to anyhow struggle to earn an income," he said.

Reval said frustration has been mounting among villagers as the government has not fulfilled the promises and assurances it offered Tamil minorities after the war ended in 2009.

The 400-year-old shrine is the lifeblood for villagers, with pilgrims bringing much-needed revenue to the region. It also has been a source of refuge for Tamils, having been home to thousands of refugees on several occasions. In 1999, the shrine was shelled, killing 44 Tamils. Nonetheless, it remains a center of pilgrimage and worship for Sri Lankan Catholics, both among the majority Sinhalese and minority Tamil populations.

But lately, that unity has been tested. Sri Lankan Catholics gather at the Our Lady of Madhu Shrine in Mannar. The shrine is seen as a symbol of unity between the Sinhalese and Tamils. (Photo by Quintus Colombage)

Saraswathi Devi, 35, lost her leg in a mining accident. A single mother, she speaks of the struggle she faces raising three children.

"We sell candles at the church yard and sell the little amount of vegetables and firewood from my garden, but this income lasts only a few months," she said.

Unable to walk comfortably with her ill-fitting artificial limb, she remains in a perpetual state of sorrow as she worries about her children's future. In her mind, the civil war never ended.

Sri Lanka has faced criticism for failing to properly investigate alleged human rights abuses that occurred during the final phase of the civil war. About 40,000 people were killed during the war's waning months when government forces defeated the Tamil Tiger rebels, who had been seeking a separate state for ethnic Tamils.

Brito Fernando, convener of the Families of the Disappeared and co-convener of the Platform for Freedom, said that hearts and minds of the Tamils have not been won yet and that a full reconciliation remains elusive.

"A number of unresolved issues remain, including the lack of progress toward a long-term political solution, human rights violations, thousands of widows, political prisoners and disappeared, allegations of crimes against humanity and war crimes," he told ucanews.com.

"Left unaddressed, these issues could lead to another conflict," Fernando said.

"Already six years after the war ended, the situation appears to be getting worse, not better but we keep hope on the newly appointed government. A permanent peace is only possible through a better understanding and reconciliation among all the communities," Fernando said.

Next month, the U.N. Human Rights Council is scheduled to meet, with many countries expected to press Sri Lanka for a full accounting on the conduct of its troops at the end of the civil war.

Father Victor Soosai, the Mannar diocese's vicar general, said the shrine is seen as a symbol of unity between the Sinhalese and Tamils.

"We purposely celebrate all liturgical services in the Sinhala and Tamil languages," Father Soosai said.

The diocese also has organized a peace and reconciliation home where families from both groups can gather together.

"Government development projects in the north do not indicate that the wounds of war victims have been healed," the priest said.

Basil Fernando, former head of the Asian Human Rights Commission, said that the new government should work collaboratively with Tamil community leaders to heal the country.

"The government should win over the majority community by demonstrating that reconciliation is beneficial to everyone," said Fernando, a lawyer who won the Right Livelihood Award, known as the "alternative Nobel Prize," in 2014.

"The issue of the war widows should include also the widows of soldiers, by that way, the matter could be presented as benefiting both communities," he told ucanews.com.

"A legal framework needs to be created where justice will once again be available to everyone and through this approach the pain of the wounds created during this war period can be brought to an end," he said.