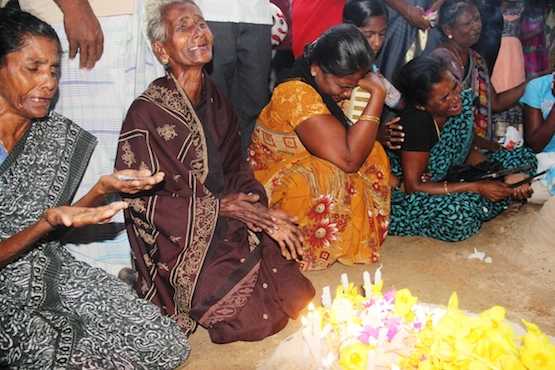 Sri Lankan ethnic Tamil women May 18 cry at the graves of their relatives who died in fighting in Mullaitivu where thousands were killed in the final days of the decades-long war that ended in 2009. (ucanews.com photo)

Ethnic Tamil people in Sri Lanka are offering prayers to remember the thousands who died on the battlefields during the final days of the country's decades-long civil war.

Catholic priests, nuns, Hindu priests joined hundreds of Tamil people May 18 in Mullaitivu, the northern village where Tamil Tiger rebels fought their last stand after 37 years of war in 2009, but for years, villagers were unable to mark the anniversary.

"My second son was killed at Mullaitivu by a mortar shell. My third son was disappeared after being taken into custody by the Sri Lankan army," said a tearful Jeyakumari Balendran, a mother of four who sat on the ground at the gathering at Mullaitivu.

Jeyakumari and her daughter Vibooshika were also arrested on terrorism charges but later released after pressure from local civic rights organizations.

"This is the seventh year of missing my two sons but I still didn't get justice," she said.

"We are little free under this new government to publicly remember our relatives without any disturbance from the army or police. Earlier we didn't have any place to remember them and could only light a lamp at home and pray for them,” Jeyakumari said adding that now she and others have a place to come and light a candle, offer flowers and pray.

During the previous government that ended the civil-war, which was voted out of power in January 2015, cemeteries for Tamil Tigers and other monuments were destroyed. Arrests, threats and intimidations of those organizing and participating in Tamil commemoration events only stopped after that government left office.

"I lost my eldest daughter at Mullaitivu at the end of the war. I know that I will never get my daughter back by punishing the culprits but the culprits should be punished to make sure that this type of incident never happens again," said Sagayaseeli Vimosanaraja, 48, a Catholic mother of three.

Watch this ucanews.com video ofTamils and clergy as they remember thousands who died on Sri Lanka's battlefields during the final days of the civil war.

This year, the government did not celebrate May 18 as "Victory Day" but as a day of reconciliation to find a path to heal the wounds of war.

President Maithripala Sirisena vowed to pursue reconciliation efforts with the Tamil minority more closely than his predecessor Mahinda Rajapaksa who oversaw the crushing of the rebels.

Holy Family Sister Matilda Lazarus who attended the event at Mullaitivu said, "The government is very slow to bring justice to the Tamils… Before next time, some relief should be given to the wounds of the Tamil community."

The war that began in 1983 came to an official end May 18, 2009 when the government overran the Tamil Tigers, an insurgent group that fought to carve out a separate Tamil homeland in the country's North and East.

Human rights workers have alleged that Tamil rebels held a large section of the Tamil civilian population as human shields and as child soldiers. The former Sri Lankan government were accused of mass civilian killings by smashing its way through this human shield.