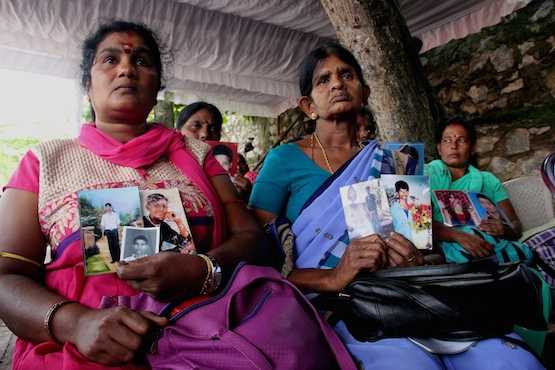 Sri Lankan women hold photos of family members missing from the civil war, during a 2015 demonstration in Colombo. (Photo by Quintus Colombage)

Tamil people in Sri Lanka's North want the right to honor their people who died during the decadeslong civil war that ended in 2009, a senior priest said.

Father Pathinathan Josephdas Jebaratnam, vicar general of Jaffna Diocese, said Feb. 17 that Tamils want the right to remember their dead and for the government to enact laws that ban hard-line parties who promote tension and conflict between races, language groups and religions.

A day earlier, Father Jebaratnam met with members of the government-formed Public Representations Committee on Constitutional Reforms. The committee is seeking the ideas from a cross-section of Sri Lankans in drafting a new constitution for the country.

Father Jebaratnam told ucanews.com that until last year the Tamil people were unable to memorialize their dead.

More than 60,000 Tamil rebels and civilians who were killed in the war, with the majority of the deaths occurring in the war's final stages.

"Just as the families of the Sri Lankan soldiers remember their loved ones who died in the war, the people in the North and East should be allowed to remember their dead in an appropriate, decent, free and dignified manner," Father Jebaratnam said in a statement handed to the committee.

"These militants who died in the war and a big number of civilians especially those who died in the final stages of the war in 2009, were in some way related or connected to the people in the North and East," he said.

Father Jebaratnam also said that there needs to be sufficient guarantees in the new constitution to ensure fundamental rights to minority communities and a ban on extremist groups that incite tension, referring specifically to the hard-line Buddhist group, Bodu Bala Sena.

If strong measures are not taken now to ensure the safety and security of all Sri Lankans, it could lead to another cycle of violence, "which the country cannot afford to face," Father Jebaratnam said in his statement.

Father Jebaratnam said the Tamils endorsed a federal administration for the country, which should give opportunities for people to live with more independence and sovereignty, "so the Tamils will feel they have equal rights that they were denied in the past."