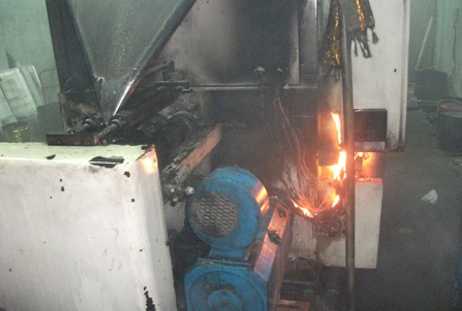 Equipment was damaged beyond repair by the attack

An outspoken Tamil newspaper in the north of the country that been subjected to repeated attacks has been stormed by armed men who set its printing presses ablaze.

The attack on the ‘Uthayan,’ or Rising Sun, on Saturday, was the second act of violence against the Jaffna-based newspaper in two weeks.

Three men brandishing a machine gun and pistols stormed the building in the early hours of Saturday, he said.

“It is only the army and the paramilitary groups who have arms in the North,” he added.

The police have started an investigation into the attack. But the newspaper, which is considered a Tamil nationalist publication, does not hold out any hope the attackers will be brought to justice.

“No proper investigation or arrest has been made in any of the previous attacks,” Thevanayagam said.

Four employees were hurt in an attack on one of the paper’s distribution offices in Kilinochchi earlier this month.

The attacks follow criticism of the paper by government politicians over recent articles which claim the armed forces are taking over businesses in the north of the country.

Eswarapatham Saravanapavan, the ‘Uthayan’ owner said that the attack was aimed at silencing opposition political parties ahead of elections in September.

He also pointed the blame at the armed forces or groups linked to the military.

Sri Lanka’s Defense Ministry and the army later denied any military involvement in the attack.

The government has come under increasing criticism by rights activists over what they claim has been a crackdown on press freedom in the country. Several publications have been attacked and websites blocked, while journalists have been beaten, murdered of have dissapeared.

At least 14 journalist have been killed in Sri Lanka since 2006 while many more have fled the country, according to Amnesty International.