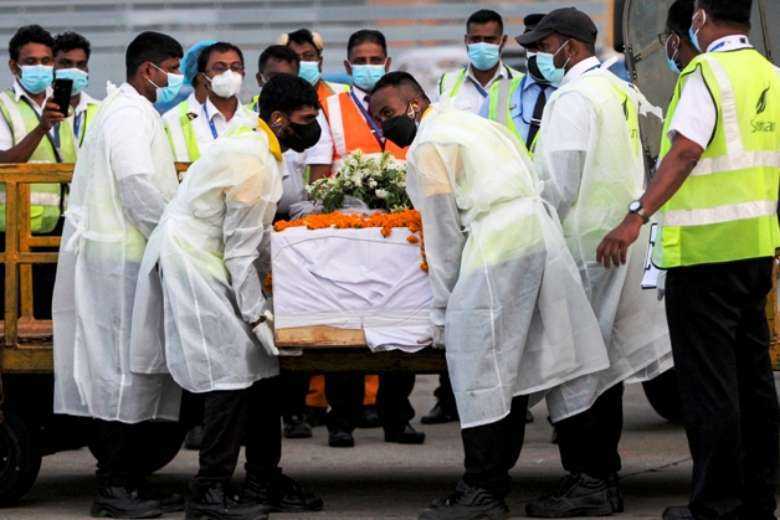 The coffin carrying the remains of the Sri Lankan factory manager who was beaten to death and set ablaze by a mob in Pakistan arrives at Bandaranaike International Airport in Katunayaka on Dec. 6. (Photo: AFP)

The brutal lynching of Sri Lankan Priyantha Kumara Diyawadanage in Pakistan has caused great concern among Catholic and Buddhist religious leaders back home.

The religious leaders strongly condemned the crime and urged the Pakistan government to bring the culprits to book soon.

Diyawadanage, 48, was accused of committing blasphemy against Islam at the factory he managed in Sialkot, Punjab province, and beaten to death by a mob on Dec. 3. His body was brought to the Sri Lankan capital Colombo and the last rites were expected to be held on Dec. 8.

Cardinal Malcolm Ranjith said such killings were an insult to religions and called on leaders of all countries to work diligently to prevent such heinous crimes that are committed under the guise of religion.

“There is nothing more tragic in this world than the killing of a man by extremists in the name of religion for personal and political gain,” Cardinal Ranjith said while expressing the hope that the Pakistan government will take immediate action against the culprits.

Buddhist monks called on the Sri Lankan government to pursue Pakistan to ensure justice and closure for Diyawadanage’s widow and children besides helping them with financial compensation.

Pakistan will leave no stone unturned to apprehend those involved. They will be given very strong punishments

Asgiri Chapter general secretary Ven. Pahamune Sumangala Nayaka Thera and Ven. Dr. Medagama Dhammananda Thera said in a statement: “It is in the best interest of the government of Sri Lanka as well as those responsible in each country to ensure the safety and welfare of Sri Lankan citizens currently employed in various services, not only in Pakistan but in almost every country in the world.”

Pakistan Prime Minister Imran Khan has said that he was overseeing the investigations and would ensure maximum punishment for those responsible for the crime.

“Pakistan will leave no stone unturned to apprehend those involved. They will be given very strong punishments,” he told Buddhist, Hindu, Muslim and Christian leaders, according to Al Jazeera.

Ahmad also said that Pakistan’s prime minister had spoken with Sri Lankan President Gotabaya Rajapaksa to reassure him that Pakistani authorities were investigating the lynching.

Khan in a phone call with Rajapaksa said Pakistani police had arrested more than 100 people in connection with the killing, added Al Jazeera.