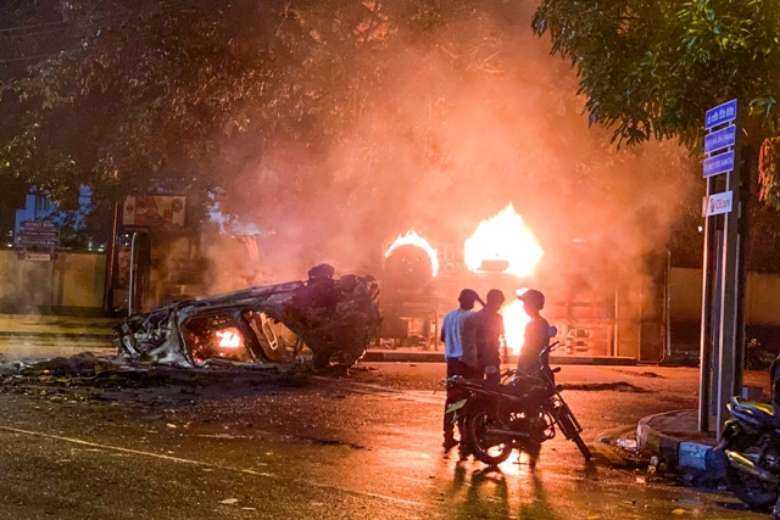 A vehicle belonging to security personnel and a bus are set alight near outgoing Prime Minister Mahinda Rajapaksa's official residence in Colombo on May 9. (Photo: AFP)

Priests and nuns in Sri Lanka joined hands with Muslim religious leaders to thwart an attempt to incite sectarian violence in the Catholic stronghold of Negombo.

An armed mob that came from outside the area broke into the Mahahunupitiya locality of the famous tourist town on the western coast late evening on May 10 and began assaulting its residents.

Four persons injured in the attack were rushed to hospital as several shops and vehicles belonging to local Muslims were set on fire and destroyed.

The incident came in the wake of Sri Lanka’s worst economic crisis accompanied by nationwide protests on a day that witnessed the loss of eight lives as police cracked down on peaceful protesters.

Tension mounted in the area as darkness descended when Catholic priests and nuns in religious habits appeared on the streets to join their Muslim counterparts in protecting the lives and properties of the fellow minority community.

Though Negombo is known as "Little Rome" for its ancestral Roman and Gothic-styled churches and a large Christian community, it also boasts a wider multifaith community comprising Buddhists, Hindus and Muslims.

The priests and nuns stayed on the streets until midnight while some priests returned again in the morning to ensure all was calm and peaceful.

Residents said the Catholic priests played a critical role as mediators in restoring normalcy to Negombo in what would have been otherwise a nightmare situation amid the chaos the island nation is witnessing.

Father Ananda Vithana, parish priest of Our Lady of Purification Church in Bolawalana in Negombo, said there was no damage to the church and statues.

“Hundreds of Muslims and Sinhalese stood on opposite ends waiting to fight but we intervened and could prevent a conflict between the two communities," he said.

Father Vithana said all the priests and nuns gathered together and worked as a team to finally control the tense situation.

Locals praised them and said a pro-government mob tried to incite trouble in Mahahunupitiya but failed due to the intervention of the priests.

“The government does not have power anymore, hence its supporters are trying to create conflict. All religious leaders need to be vigilant at this moment," said Sujith Ranadeera, a resident.

“Keep calm and do not allow violence to dull what we are trying to gain in the country. We want to win our demands democratically and justly"

Meanwhile, President Gotabaya Rajapaksha has urged people to reject attempts to foment racial and religious disharmony amid the spiraling violence and arson in most parts of the country over his government’s handling of the worsening economic crisis.

The resignation of his brother Mahinda Rajapaksha as prime minister and a curfew have failed to douse public anger.

Police sources said that among the eight deaths reported so far were a lawmaker, the chairman of a municipal council and a police officer. Some 47 vehicles and 38 houses and shops were torched.

Mobs of people attacked the vehicles and houses of former ministers and elected representatives even as the attorney general advised the police to conduct a full investigation.

“We hear that such attacks are still happening,” said Cardinal Malcolm Ranjith of Colombo while demanding an end to the suffering of the people and a change that would take the country back to the right path.

“We do not know who is responsible for what is happening now,” he said while advising priests to prevent disharmony among communities.

“Various political forces could be active and all these attacks must be stopped immediately,” said Cardinal Ranjith. “Keep calm and do not allow violence to dull what we are trying to gain in the country. We want to win our demands democratically and justly.”

The Bar Association of Sri Lanka also has urged a halt to the violence unleashed on the streets to allow the rule of law.