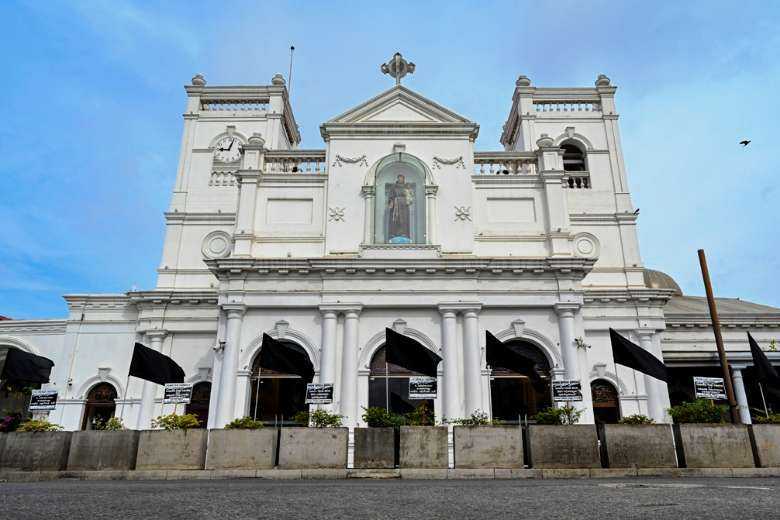 Black flags in protest against the alleged failure to prosecute those responsible for the 2019 Easter Sunday attack are seen at St. Anthony's Church in Colombo on Aug. 21. (Photo: AFP)

The Sri Lankan Supreme Court will hear a fundamental rights petition filed by Father Cyril Gamini seeking to prevent a possible arrest for raising questions about the involvement of the state intelligence operatives in the Easter Sunday attacks.

Father Gamini was summoned by the Criminal Investigation Department (CID) after a complaint by Major General Suresh Salley, director of the State Intelligence Service, alleging the priest and others had made certain statements in connection with the 2019 terrorist atrocity.

A prominent Catholic priest and a member of the archdiocese’s proclamation committee on the search for the truth of the Easter bombings, Father Gamini had reportedly said that intelligence units had provided financial and other vital assistance to Saharan Hashim, leader of National Thowheed Jamath, involved in the attack on churches and hotels.

The priest did not appear before the CID but moved a petition in the Supreme Court seeking an interim injunction against the attempts to arrest him.

Father Gamini told the court that he had revealed the facts during an online discussion to make the local and foreign public aware of the Easter Sunday attacks. His team of lawyers had informed the CID why he could not appear before it on Nov. 3.

His lawyers also pleaded before the Supreme Court how the priest’s fundamental human rights have been violated by the summons from the CID.

Ruwini Niroshika, an activist and a Sunday school teacher from Negombo, said there seemed to be a plan by the CID to arrest Father Gamini after recording his statements.

“We have a doubt that some government officers and politicians want to silence the Church on the issue [of the Easter Sunday attacks],” said Niroshika.

Vijitha Herath, an opposition lawmaker, criticized the CID summons as an attempt to create a “systematic conflict” between Catholics and Buddhists on one hand, and Buddhists and Muslims on the other.

On Oct. 27, the CID had informed the Colombo Chief Magistrate’s Court that an investigation had been launched into the comments on the Easter Sunday attacks made by Father Gamini and other Catholic priests during an online forum.

Major General Salley had claimed that the forum raised false allegations against him in connection with the attacks and had endangered his life as well as the lives of his family members.