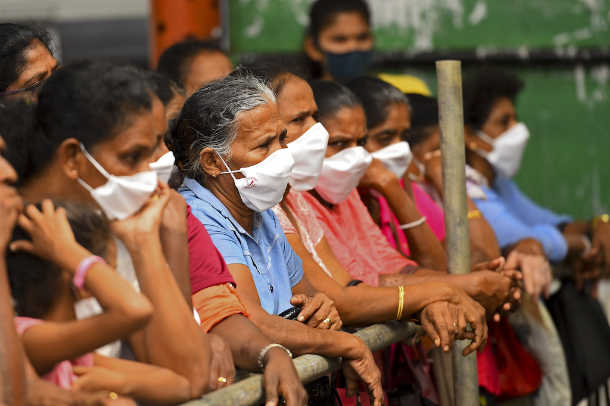 People attend an election rally ahead near Sri Lankan capital Colombo on July 28. The election was to be held on April 25 but was postponed twice due to the coronavirus pandemic before being rescheduled for Aug. 5. (Photo: Ishara Kodikara/AFP)

Rights activists have condemned a former Catholic parliamentarian and candidate for Sri Lanka's Aug. 5 parliamentary election for his comments on the LGBT community.

In an online interview on July 27, Kavinda Jayawardana said he is a Catholic and the Church strongly condemns homosexuality.

He said homosexuality is a mental disorder and he does not support the rights of the LGBT community, adding that there is no evidence that homosexuality has ever existed in Sri Lankan culture.

"Openly talking about these things is what leads to children seeing these things and behaving badly," he said.

"Read our historical documents. This dirt didn't exist in our history. This has happened due to the opening up of our world. We have become open to these mental disorders."

Many rights activists and academics have condemned Jayawardana's statement.

Arul Subasinghe, a minority rights activist, said political homophobia is a weapon used strategically, and it is the nature of politicians to publicly declare their opposition to homosexuality by hiding real issues in order to build their own image in the political arena during election time.

"The basic issue is to spread the misconception that homosexuality is contrary to Sri Lankan culture. Instead of making constructive criticisms of the views of their rivals, politicians emphasize that they are homosexual," said Subasinghe.

Homosexuality is illegal in Sri Lanka.

"We should look at all these minority communities in a compassionate manner as citizens who have equal rights and help them overcome social stigma. We should not allow politicians to misuse minorities to gain votes," she said.

"We still marginalize LGBT people and never think they are also human beings. The government and society are responsible for ensuring equality for all parts of the community regardless of race, gender, religions."

Jayawardana has apologized to the LGBT community.

“I apologized to all my friends in the LGBT community. I am extremely sorry if I have offended anyone as to a question I was asked yesterday. I was honestly very exhausted and should not have said what I said," he said in a Twitter message.

He also said he was the victim of false charges of homosexuality through a fake video that had gone viral and traumatized him.

Jayawardana recently filed a complaint with police that a group of people had circulated a homosexual sex tape to tarnish his image.