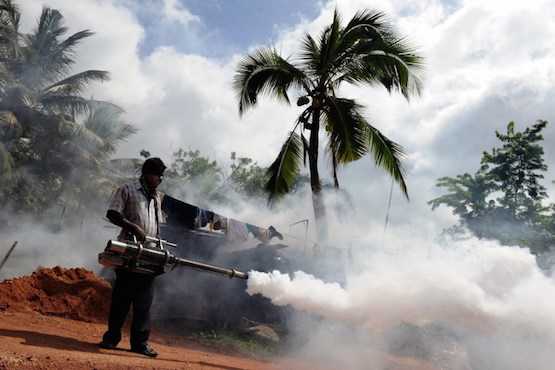 A Sri Lankan municipal worker fumigates insecticide to curb mosquito breeding in a Colombo suburb to tackle the spread of the dengue virus which is transmitted by mosquitoes. (Photo by AFP)

Cardinal Malcolm Ranjith of Colombo appealed to parish priests to make Jan. 22 a special day of prayer and activity to help curtail the spread of dengue fever.

"I encourage them to organize voluntary programs to clean their respective churches, schools and institute premises  to remove all the factors that help dengue-carrying mosquitoes breed," said Cardinal Ranjith in a statement.

Cardinal Ranjith urged young people to spread the program among their neighbors and requested that priests invite other religious leaders to get involved.

According to statistics from Sri Lanka's ministry of health, 2,584 suspected dengue cases have been reported already in 2017.

Father Kithsiri Thrimanne from St. Lucia's Cathedral in Colombo told ucanews.com that they will start the program with a Mass celebrated by Cardinal Ranjith and who will speak on the importance of eradicating dengue-carrying mosquitoes.

"The cardinal will start the Shramadana Campaign (gift of labor) at the church and all the parishioners, along with parish associations, catechists and young people, will join with him," the priest said.

"We have also planned to visit some areas like Wasala Road and Blomendhal where there have been a lot of cases and clean other areas where dengue cases have been reported," Father Thrimanne added.

Ivan Vidanarachchi, one of the coordinators of the campaign said that all parishes will be involved.

"There are 400 churches under the cardinal and all of them will be involved. The Police Environment Division will also join with and we have invited all other religious leaders to come," he said.

Dengue is spread by mosquitoes who thrive in areas with standing water, including puddles, water tanks, containers and old tires. Lack of reliable sanitation and regular garbage collection contributes to its spread, according to the International Association of Medical Advice for Travelers.

There are two peak seasons for dengue in Sri Lanka, October to December and May to July. Symptoms include fever, headaches and rash. It can be fatal in some cases.