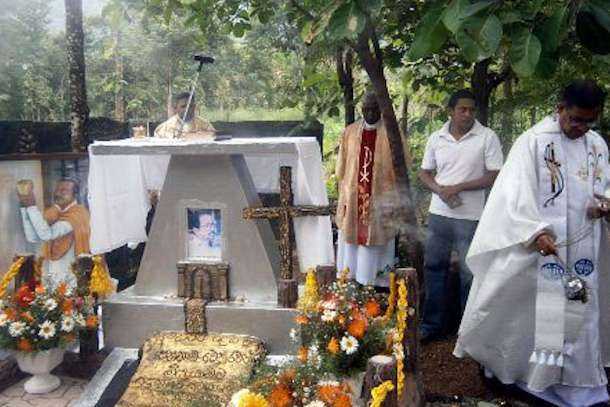 A priest incensing the tomb of Oblate Father Michael Rodrigo, who was shot dead on Nov. 10, 1987. Oblates have started campaigning for his canonization on his 33rd death anniversary. (Photo: omi200.wordpress.com)

The Oblate congregation in Sri Lanka has intensified calls for a member priest's canonization, three decades after he was shot dead during a communist insurgency in this island nation.

The Missionary Oblates of Mary Immaculate congregation said it plans to move officials in the Vatican and local Church to initiate the canonization process of Father Michael Rodrigo, a 60-year-old priest shot dead while celebrating Mass on Nov. 10, 1987. Father Roshan Silva, Oblates' provincial of the Colombo province, said on Nov. 9 that they plan to start a campaign to recognize the heroic life of Father Rodrigo, marking the 33rd anniversary of his death.

"I will consult with the authorities in Rome" to initiate the canonization process, Father Silva said while addressing an online gathering that included a bishop, priests, nuns and laypeople. The congregation plans to appoint a vice-postulator to help the canonization process, which starts with a diocesan inquiry to see if the candidate led a virtuous life witnessing to the faith. Father Silva said they also plan to approach Bishop Julian Winston Sebastian Fernando of Badulla to start the investigation as the process's preliminary step. The bishop's diocese covers Alukalawita village in Buttala, where Father Rodrigo was killed.

"I invite all of you to pray … [so that we see him] as a saint during our time," said Father Silva.

An unidentified gunman shot Father Rodrigo while he was celebrating Mass inside Subaseth Gedara, a Christian-Buddhist dialogue center he started in 1980 in the village. He was shot through the window of the center. Several bullets hit him in the head, and Father Rodrigo fell dead on the altar with a broken skull.  Blood spattered the clay walls, and the chalice bowl was filled with blood. Known murder mystery

From 1987-89, about 60,000 young people were killed or disappeared during the Janatha Vimukthi Peramuna, a Marxist-Leninist political uprising against the ruling government.

Father Rodrigo, who held a doctorate in theology from the Paris Catholic Institute and a doctorate in philosophy from Rome, reportedly refused a job as a theology professor in Paris to work with village people for their sociocultural advancement. During the insurgency, military and paramilitary groups killed and tortured young rebel fighters and civilians suspected to be insurgents. Christians, including nuns, were threatened by government forces for speaking out against abductions and extrajudicial killings. However, Father Rodrigo, who had deep sympathy for young people, actively intervened to prevent young people's arrest and release the arrested, church people said. The military maintained that Father Rodrigo had helped insurgents, but the priest replied to the military that he could not drive away those who came to the place of God. The priest's murder continues to be a mystery as it was never investigated nor responsibility fixed. Some Catholics said the official Church did not demand an inquiry, fearing a government backlash. "No one seems to be going to ask for justice for his death," said Ravindu Warnakulasuriya, a Catholic who leads the Kithudana Pubuduwa renewal movement in Sri Lanka. "Although it is still possible to obtain information from relevant authorities under the Right to Information Act, sadly many are reluctant to take on such a challenge."  Warnakulasuriya said the village area of Alukalawita, some 250 kilometers east of capital Colombo, has only "very few Catholic families among majority Buddhists." Father Rodrigo should be named a martyr "not to make his statues and worship but to challenge present priests, bishops and laypeople on how to follow Jesus and to continue the mission," he said. Born in a middle-class family in 1927, Father Rodrigo became an Oblate in 1948 and was ordained in Italy after seven years of study in Rome. He was a teacher of philosophy, Buddhism, psychology and logic for 16 years at the National Seminary in Kandy.