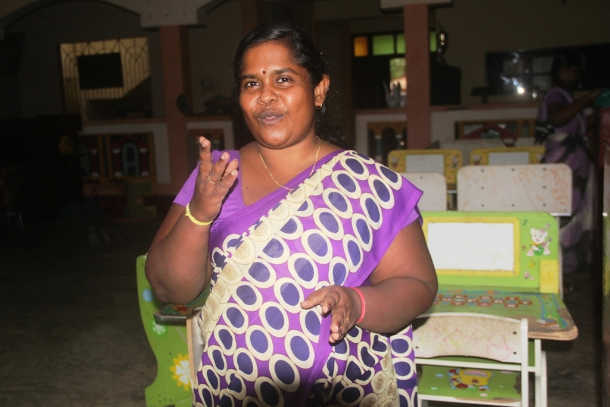 Wanasingam Dilani, a teacher at the MARDAP center in Mannar, Sri Lanka, said teaching kids with disabilities can be a challenge as they often lash out at their fellow students out of frustration or loneliness. Others refuse to learn and slam their pencil boxes and books on the floor, she said. (Photo by Niranjani Roland/ucanews.com)

From being made orphans to suffering trauma or physical disabilities, hundreds of children in Sri Lanka's Mannar district were affected by the nation's 26-year civil war that ended a decade ago.

Some lost their limbs in bombings while many remain haunted by the memories of the war, according to Sister Josephine Mary of the Holy Family.

She deals with amputees and children who have had their speech or sight impaired in her capacity as a teacher after launching the Mannar Association for the Rehabilitation of Differently Abled People (MARDAP) in 2002.

"We have identified nearly 2,000 children [in the area] with physical or mental disabilities," she said. "So we've been working on trying to slowly bring them into the fold of the mainstream education system here."

She has been visiting families in former war-torn areas for years to identify those with at least one disabled member and help with family rehabilitation efforts.

Many parents asked her if it would be possible to start such a program as their offspring were struggling to integrate into a "normal" classroom environment at a government-run school due to behavioral and other issues, she said, adding this inspired her to establish MARDAP.

"When children win medals or earn certificates at sports events or from other competitions, it raises their image of themselves," she said.

"Their parents are also thrilled to see how they are improving and what they can achieve," said Sister Mary, who holds the title of director at the organization.

There, people with disabilities can receive skills training, learn ways to generate a basic income, be taught sign language, get access to health services, and participate in sports events and cultural programs. Sister Josephine Mary said Sri Lanka's civil war has left thousands of children physically disabled. Many more have been deeply traumatized by their experience of the conflict. (Photo by Quintus Colombage/ucanews.com)

The government signed the United Nations' Convention on the Rights of Persons with Disabilities in 2007 and ratified it in 2016 after nearly a decade.

It has thrown a lifeline to more than 250 women who had no access to education or jobs by teaching them how to build their own revenue streams while assisting them by providing micro loans.

"We also organize yoga classes and other forms of physical exercise. We get them involved in drama, dancing and speech therapy lesson," Sister Mary said.

"We even use donkeys as a form of therapy. We can channel the kids' anger and negative emotions into something more positive by teaching them to care for and love animals."

The agency now operates two centers that offer special education, one in Mannar and another in Murunkan.

According to statistics from the World Health Organization (WHO) there are over a billion people living with a disability of some kind, including 5.1 percent of the global population below the age of 15.

In Sri Lanka, 8.7 percent of the population was disabled as of 2012 with many of the affected in the 15-29 age bracket, data from the Department of Census and Statistics show.

Wanasingam Dilani has been working with children with disabilities for three years. The 33-year-old said she got attuned to the sensitivities this requires as her brother is dumb while her mother, auntie and uncle are deaf.

Dilani said the agency offers a pick-up and drop-off service so the children get to school on time and also get home safely. About 30 kids now regularly attend her classes, she added. However, teaching can be a challenge. The children often lash out at their peers or throw their books on the floor in frustration, loneliness or fear, Dilani said.

"It takes longer to get close to them and make them trust you," she said. "But over time we become friends, they follow the lessons, do their coloring-in work, and start to identify letters and numbers."

She said many parents are thrilled their children can attend a school for free near their homes but others are afraid to let them out of the house.

"The ones who stick with our program usually improve a lot," Dilani said, adding that Muslim, Hindu and Christian children all intermingle freely at MARDAP.

"And they all have Sister Mary to thank for that. All of these facilities are here because of her," she said. "I feel so proud to be able to say I teach here."

At least 16 children have "graduated" from MARDAP and been successfully funneled back into the mainstream education system, she said.

Edin Figurado, 41, works as a manager at the organization despite needing crutches himself to get around.

He said MARDAP further incentivizes the children by putting small amounts of money in their bank account and teaching them how to invest it in craft-making or other ways of earning a livelihood.

Without programs like this, "the kids would just stay home and lack confidence," he said.

"I used to be terrified of speaking in front of an audience but now I can do it thanks to Sister Mary's leadership program," he said.