Novice Buddhist monks prepare food for people in need during Sri Lanka's nationwide coronavirus curfew at a temple in Delgoda on May 9. (Photo: Ishara Kodikara/AFP)

Sri Lankan Buddhist monks have cremated damaged and broken Buddhist statues that had been abandoned in temples.

The sacred statues were cremated at Bodhiraja temple in Embilipitiya, 212 kilometers southeast of capital Colombo, on Vesak Day.

Devotees often leave broken statues in temple grounds and under sacred Bo trees without destroying them on their own sites.

Lord Buddha attained enlightenment under a Bo tree and the tree plays an important role in the cultural and spiritual life of Buddhists in Sri Lanka.

Ven. Omalpe Sobitha Thera said leaving statues of Lord Buddha at various places in temples and under trees does great harm to his followers.

"These abandoned statues have been given due respect and cremated. In this way, by honoring and cremating them, something good happened. This is the first time we have done something like this. Everything should have an honorable ending," said Ven. Sobitha Thera.

Buddha statues that had been damaged in houses and temples were recently collected after being left in places that were insulting to Lord Buddha.

The statues were first garlanded with flowers and about 30 Buddhist monks participated in the ceremony. Hundreds of statues were cremated using sandalwood, an expensive wood famed for its distinct fragrance.

The event took place on Vesak Day on May 8. The Vesak festival, coinciding with the full moon each May, commemorates the birth, enlightenment and death of the Lord Buddha.

Due to the nationwide lockdown to stem the Covid-19 outbreak, Buddhist devotees performed rituals in their homes to celebrate the Vesak Poya on May 7-8. Neela Ranjani, a Buddhist mother from Meerigama, said she has seen many broken Buddhist statues left under Bo trees by the side of roads. "I have also made the same mistake several times and it is common sight under Bo trees," said Ranjani.

"The Church encourages imitating saints as role models and Catholics honor and admire saints. In the recent past, many statues of saints that had been damaged were left under life-size statues of saints." 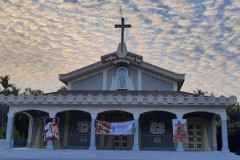 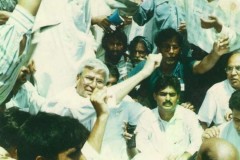 When the Church steps up for migrants