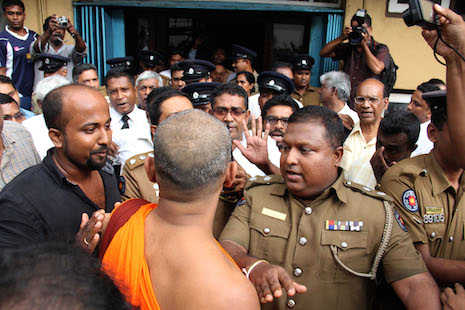 A police officer confronts a Buddhist monk outside a meeting of Tamil families and international officials in Colombo. (Photo by ucanews.com)

Pro-Sri Lankan government activists stormed a meeting between families of the disappeared and foreign diplomats in Colombo on Monday evening.

The pro-government mob, led by a group of Buddhist monks, forcibly entered the meeting and threatened the Tamil participants.

The US embassy Acting Deputy Head of Mission Michael Honigstein and representatives from Britain, Switzerland, France and the European Union missions in Colombo participated in the meeting.

"You are anti-Sri Lankans and greedy for US dollars," the mob shouted at the families.

The local organizers of the meeting said the pro-government mob used threatening language against diplomats too, AFP reported.

The Buddhist monk who led the mob, the Venerable Anguludelle Jinananda Thero, said the meeting was illegal and its participants were therefore "terrorists, not innocent civilians".

"Civil society groups are in the process of gathering information to hurt the government of Sri Lanka," he said.

The protesters said that they had the right to disrupt any anti-Sri Lankan meeting organized by traitors.

The mob also accused the meeting's organizers of attempting to tarnish the image of Sri Lanka.

Nimalka Fernando, president of the International Movement against All Forms of Discrimination and Racism, said they sought assistance from the police, who were unable to control the protesters. Director Nimalka Fernando said the event was called so that war victims could "gather their grievances".

"We did not have an illegal meeting, but a peaceful meeting to gather their grievances," she said. "What is wrong with sharing their problems and grievances in a peaceful manner? We want to make a bridge between the Sinhalese and Tamils."

J.C. Weliamuna, a human rights lawyer, said the Tamil families were exercising their constitutional rights to freedom of association and expression.

"They got together to discuss their grievances in a peaceful meeting, how can it be named as an illegal meeting?" he said.

"Families of disappeared persons have the right to tell their stories to the world."

Meanwhile, the US embassy in Colombo issued a statement condemning the disruption of the meeting.

"The initial reaction of the local police to this disruption appeared to be in support of the mob efforts to shut down the meeting," the statement said.

"The US strongly urges the government of Sri Lanka to enforce the rule of law and permit all citizens to exercise their most basic human rights and to take all possible steps to ensure the safety of families who had traveled to attend the meeting."

The incident occurred as Sri Lanka faces an international investigation into allegations that government forces killed 40,000 Tamil civilians in the final months of the decades-long civil war, which ended in 2009. Sri Lanka has longed denied the charges.

In mid-July, a hardline Buddhist group carried out a campaign in Polonnaruwa to stop evangelical churches from conducting religious services.

On June 15, a Buddhist extremist organization was accused of organizing anti-Muslim violence in Aluthgama that killed at least four people and injured 80.