Bishop Gnanapragasam, the apostolic prefect of Quetta, dies of a heart attack at 80 Bishop Victor Gnanapragasam was appointed to the post of apostolic prefect of Quetta in December 2001. (Photo supplied)

Sri Lankan missionary and the apostolic prefect of Quetta in Pakistan, Bishop Victor Gnanapragasam, has died at the age of 80.

The commission for social communications of Islamabad-Rawalpindi Diocese announced the news on its Facebook page. The bishop died of a heart attack on Dec. 12.

“His  Excellency Bishop Victor Gnanapragasam (Roman Catholic Apostolic Prefecture of Quetta) has gone to the Lord. We pray that you reward him in your goodness and mercy. May his departed soul rest in eternal peace,” said commission director Father Nasir William.

“May the angels lead you into paradise and may the martyrs come and welcome you and take you to the new and eternal Jerusalem. Rest in peace, Your Excellency, until we meet again. Our condolences and sympathies to the family members and the clergy.”

Born in Jaffna, Sri Lanka, to a Sri Lankan Tamil family in November 1940, Bishop Gnanapragasam completed his novitiate with the Missionary Oblates of Mary Immaculate in Kaluthara (1959). He then moved to Kandy, where he studied philosophy and theology at Our Lady of Sri Lanka Seminary from 1960 to 1966.

In December 1966, he took his final vows and was ordained a priest. He traveled to Pakistan in 1973 and was a member of the Oblates of Mary Immaculate, Pakistan.

He served a parish priest in Gojra in the Diocese of Faisalabad,from 1976-77 before joining a training course in youth ministry in Manila, Philippines, from 1977-79.

He returned to Toba Tek Singh as a parish priest and remained there from 1987–89. He later undertook studies in psychology and spirituality at St. Anselm Institute in Kent, England, and then courses in spirituality at the Angelicum, Rome, from 1989-92.

He was the parish priest in Gojra for a third time from 1992–93; assistant in the formation house of the Oblates in Karachi from 1993–97; and first counselor of the OMI delegation in Pakistan from 1997 to 2001. A new year, a new Pakistan 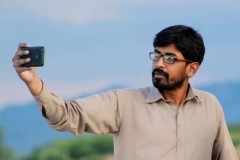 Bishop Gnanapragasam was appointed to the post of apostolic prefect of Quetta in December 2001.

He was consecrated a bishop at St. Patrick's Cathedral, Karachi, on July 16, 2010, by the apostolic nuncio to Pakistan, Archbishop Adolfo Tito Yllana.