Reconciliations efforts will be in vain if the law is not equal and just, says Catholic priest 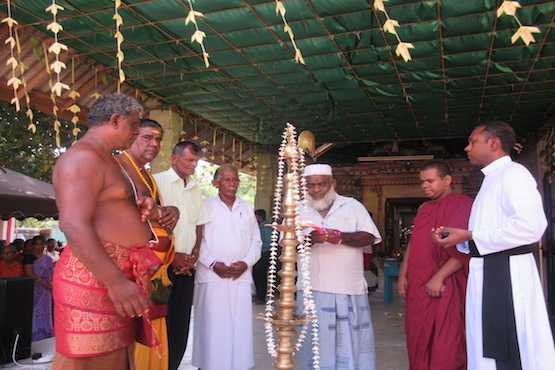 Leaders from various religions come together in a show of interreligious harmony during an event in Sri Lanka in this 2015 file photo. (ucanews.com photo)

One year after coming to the power on a reformist platform, Sirisena proposed a new constitution Jan. 9 as a way to protect and integrate its religious and ethnic minorities by guaranteeing their fundamental rights and freedoms following a long civil war.

Since 1983, the Sri Lankan government had been embroiled in a brutal war against the Tamil Tigers, an insurgent group that fought to carve out a separate Tamil homeland in the country's North and East until it was defeated militarily by government forces in May 2009.

"If the new constitution is not seen to be equal and just, efforts at drafting it will be in vain," said Father Yavis.

Sri Lanka is a multiethnic and multireligious country. Buddhism is the main state religion under the current constitution.

"The new constitution should address the need of all communities irrespective of religion or ethnicity as all of them are citizens of one sovereign nation," said Venerable Badiwewa Diya Sena Thero, abbot at the Kandakkuliya temple.

The constitution should not be produced by one group of people sharing the same interest but instead include stakeholders who represent victims of religious and ethnic conflicts from all the parts of the island, said the Buddhist monk.

"Catholics being a minority in Sri Lanka have come together for the first time to voice out the needs of all minorities. We want to make use of this opportunity to address the needs of minorities," Thilina Alhakoon, national convener of Jathika Kithunu Pawra association, told ucanews.com.

The association is a collaboration of about 20 Catholic movements including the Young Christian Workers, Catholic Laborers' Movement and the Catholic Teachers' Movement.

The government has already started to hear the public on the proposed constitution.