Ruki Fernando of the Inform Human Rights Documentation Center and Oblate Father Praveen Mahesan, director of the Center for Peace and Reconciliation, were detained separately for questioning.

The two men were visiting the area investigating the arrest of Tamil human rights defender Balendran Jayakumari on March 13.

Fernando informed his colleagues via text message that he and Fr. Mahesan were being detained and questioned, according to Groundsview, a citizens’ journalism Web site based in Sri Lanka.

Police spokesman Ajith Rohana confirmed the arrests and said the two men would be brought to Colombo as part of an investigation.

The arrests of the activists provided further proof that human rights workers were being targeted and harassed by government authorities, the National Peace Council of Sri Lanka said in a statement.

“The arrest and detention of Balendran Jayakumari under controversial circumstances raises the question whether those who persevere to openly advocate on behalf of the victims of the war are being targeted for punitive action,” the council said.

The council also said that Jayakumari’s 13-year-old daughter has been placed in the custody of the government’s probation service, “as other families are afraid to take her in”.

Bishop Rayappu Joseph of Mannar said that the detention of Fernando and Fr. Mahesan was undemocratic and unwarranted.

"Ruki and Fr. Praveen are human rights defenders, who always come to the forefront when there is a human rights problem," the bishop told ucanews.com. US to pursue UN rights resolution against Sri Lanka 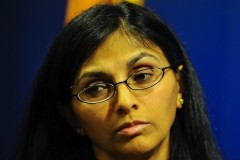 The bishop said the two men traveled to Kilinochchi to check on the status of Jayakumari.

"Where is democracy and the rule of law in the country? We need to live in peace with protection of our peoples’ rights," he said.

Brito Fernando, convener of the Families of the Disappeared and co-convener of the Platform for Freedom, said that the arrests represented an escalation of a campaign to intimidate into silence families of those still missing after the country's civil war.

"A number of human rights activists have been arrested, detained, and are being interrogated," Fernando said.

Jayakumari is an active member of the Mannar Citizens’ Committee, a coalition of families seeking information on the whereabouts of missing loved ones. She was arrested on suspicion of harboring a criminal who allegedly shot and wounded a policeman last week.

The council said that the arrest of Jayakumari ”highlights the need for the repeal of the Prevention of Terrorism Act and better protective mechanisms for citizens who campaign for human rights and justice.”

The council also called for Sri Lanka's National Human Rights Commission to investigate the case "in view of the disputed and controversial nature of the facts."

Sri Lanka was embroiled in a brutal civil war from 1983 to 2009. The military and the rebel Liberation Tigers of Tamil Eelam both stand accused of a wide range of war crimes. According to UN statistics, as many as 40,000 civilians may have been killed during the final stages of the war.

Member countries of the UN Human Rights Council are scheduled to vote March 28 on a US-sponsored resolution that could call for an investigation into alleged war crimes that occurred during the final phases of Sri Lanka’s civil war.