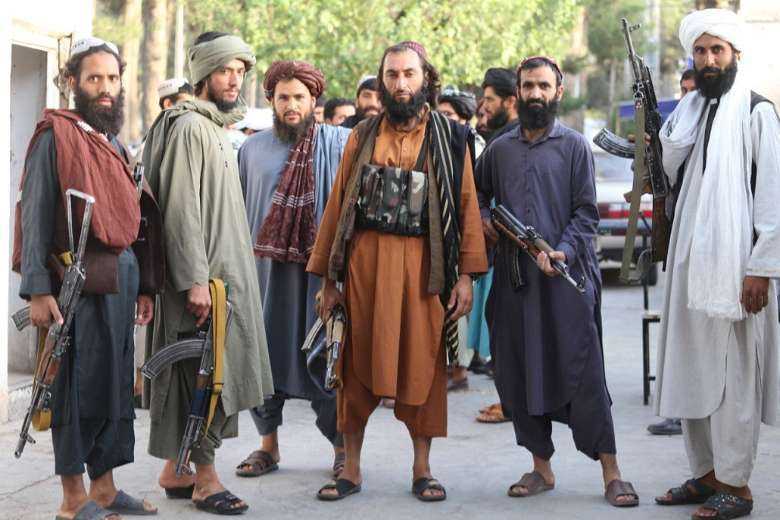 The Taliban patrol Herat on Aug. 18 as the Islamist extremists retake control of Afghanistan after 20 years. (Photo: AFP)

Rights groups have urged the Sri Lankan government to provide emergency visas for human rights defenders, journalists and others at risk from the Taliban in Afghanistan.

The National Peace Council (NPC), an independent organization working towards a negotiated political solution to ethnic conflict in Sri Lanka, called on the government to be part of the international effort to provide refuge to those who wish to leave Afghanistan.

"We urge the government to provide emergency visas for human rights defenders, journalists and others who have well-founded fears of persecution and to instruct the department of immigration not to deport any asylum seekers arriving in the country," the NPC said in a press statement on Aug. 18.

"By collaborating with civil society and religious groups in supporting the temporary stay of Afghan refugees in Sri Lanka, in line with health guidelines and international law, Sri Lanka will be setting an example of solidarity that can mobilize more international support for this humanitarian cause.

"There are about 140 Afghans in Sri Lanka who have sought asylum and are staying here temporarily until they permanently resettle in another country with support from civic and religious groups."

Sri Lanka's government signed a 2005 memorandum of understanding and 2006 terms of reference with the United Nations High Commissioner for Refugees (UNHCR) during Mahinda Rajapaksa's tenure as president.

Despite these reassurances, there continue to remain doubts based on past experiences

The UNHCR mandate is to aid and protect refugees, forcibly displaced communities and stateless people, and to assist in their voluntary repatriation, local integration and resettlement to a third country.

During the Taliban’s previous rule in Afghanistan, there were large-scale violations of human rights and cultural vandalism as witnessed in the destruction of the Bamiyan Buddha statues. The Taliban confined women to their homes, banned television and music and held public executions.

The NPC said, however, the initial indications are more positive. Taliban leaders have promised to honor women’s rights within the norms of Islamic law. It is reported that the Taliban have encouraged women to return to work and have allowed girls to return to school, handing out Islamic headscarves at the door.

"Despite these reassurances, there continue to remain doubts based on past experiences," said the NPC.

The Taliban, an extremist Islamic organization that ruled Afghanistan until ousted by a US-led coalition nearly 20 years ago, confirmed their takeover of Kabul on Aug. 15 after President Ashraf Ghani fled the country.

Peter Sebamalai, a Tamil rights activist, said that during Sri Lanka’s 26-year war many countries helped the Tamil people when they were helpless.

"The human dignity of Afghans must be respected amid the uncertainty in the country," said Sebamalai, who spent time in three refugee camps during the war.

Sebamalai said more than one million Tamils fled to India and European countries as refugees and asylum seekers.

All the governments should support Afghan women, disabled people and children in this difficult situation

"If the government can issue emergency visas for general Afghan people for a short period to help save their lives, that is a humanitarian service," he said.

A Tamil Catholic priest who supports war widows in Killinochchi said many Tamils experienced a similar refugee situation during the civil war.

"Sometimes there were no places to go and nothing to eat, and refugees spent days and weeks living under trees with their children," said the priest, who wished to remain anonymous.

"All the governments should support Afghan women, disabled people and children in this difficult situation."