Nation imports 80 billion rupees of agro-toxins a year but groups like Caritas have a message for farmers: go organic 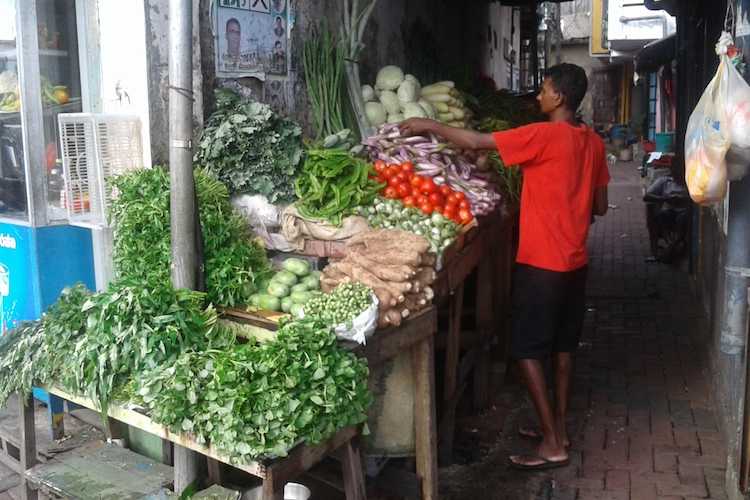 A street stall in Colombo is pictured in this file photo. Sri Lanka is seeing a spike in cases of chronic kidney disease among farmers as they rely more heavily on dangerous pesticides. (Photo by Quintus Colombage/ucanews.com)

Like most mothers, Preethi Sewvandhi is careful when choosing the produce she feeds her three children in an era when farmers increasingly rely on pesticides to boost their crops — even in idyllic regions in Sri Lanka.

Every Sunday she visits her local market to buy fruit and vegetables for the family but takes pains to scrutinize, smell and even taste them before making a purchase in an attempt to weed out anything that still harbors the stench of unhealthy chemicals, fertilizers and herbicides.

In Sri Lanka, farmers not only inject and spray chemicals onto their produce but also use widely agrochemicals and imported fertilizer in their gardens. At least some of these are harmful to humans.

Sewvandhi, a teacher from Kurunegala, said the relatively trivial act of preparing salads has become a risky business due to the number of chemical substances that now lurk among seemingly innocuous ingredients like leafy greens.

Sewvandhi, 46, has a small organic garden and a plot of land at her school to help her and her family skirt the danger of ingesting poisonous or toxic food.

"Commercial farmers use chemicals and hybrid seeds that kill friendly insects and destroy biodiversity," she said.

"When agro-chemicals are mixed with food and water supplies, it can have a damaging impact on the consumer — for example, leading to cancer and kidney diseases."

As a teacher, she expressed her disappointment at the authorities' failure to take action on this matter.

Tens if not hundreds of thousands of poor households have been harmed in recent decades by farming communities' increased reliance on toxic chemicals to give them better yields and boost their profits. The number of reported cases of renal disease has spiked as farmers fear succumbing to chronic kidney disease (CKD) almost as much as seeing their crops wither and die.

According to the World Health Organization, more than 15 percent of the population aged 15-70 in several districts nationwide has suffered from kidney disease at some point in their lives.

Over 1,100 people are hospitalized every month because of this, with about 300 related deaths reported each year.

Sri Lanka imports 80 billion rupees (US$51 million) worth of agro-toxins annually but the Movement for Land and Agricultural Reform (MONLAR) claims much of this is unnecessary as Sri Lanka has sufficient rainfall and sunlight year-round to facilitate biodiversity and natural or organic farming.

MONLAR encourages farmers and young people to educate themselves so that they have a useful level of expertise in areas such as soil fertility, ecological agriculture, water conservation and regenerative methods of farming.

Back in May 2015, Pope Francis released his Laudato si' encyclical on the importance of protecting the environment when he exhorted all people to take action to help safeguard the planet's ecosystems.

Responding to the call, Caritas, the social arm of the Catholic Church, is now helping farmers in Sri Lanka to scale back their use of dangerous chemicals by switching over to organic farming.

The organization has already begun implementing its five-year plan (2018-22) in four districts to promote the growing of chemical-free jack fruit and mango plants. It has also introduced varieties of local rice that require no chemicals.

Generally, it encourages the farmers there to use organically produced fertilizers on their crops.

Meanwhile, Caritas' local branch in the port city of Anuradhapura has initiated a farmer assistance program to promote chemical-free agriculture by introducing a range of organic farming methods.

"Caritas encourages every family to have their own small home garden where they can grow chillies, fruit and vegetables without chemicals," said Father Mellawa.

"We arrange agricultural instructors to train farmers and help CBOs sell their products to their neighbors and others at Sunday markets."

The group also organizes a clinic for kidney disease patients in the region, he added. Father Mellawa said that by encouraging organic farming they are moving with the laws of nature and observing the tenets of the pontiff's aforementioned encyclical.

"Establishing a chemical-free food supply is a long process that requires much studying and experimentation," the priest said.

"Caritas will continue to conduct programs educating men, women and young people on the benefits of organic farming this coming August."

To galvanize the government into taking action, Pubuduwa also organized a petition recently calling on Sri Lanka's President Maithripala Sirisena to devise a policy plan to protect the environment.

It also urged him to avoid supporting local and international projects that harm or threaten biodiversity so as to pre-empt an ecological and environmental crisis in the country.

It seems the government has taken heed of such calls, having commenced a three-year national program named "A wholesome Agriculture — A healthy populace — A toxin-free nation" aimed at curbing the use of poisonous agro-toxins in the farming sector.

This builds on its recent recent efforts to supply aid to farmers devastated by ruinous floods.