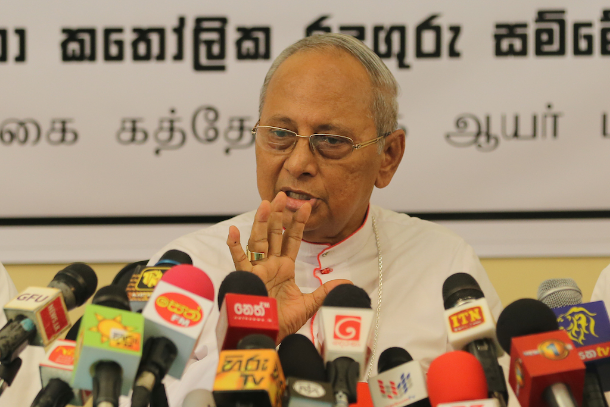 Catholic churches in Sri Lanka will reopen for Sunday Mass this weekend as bishops step up efforts to ensure interfaith harmony after the Easter Sunday suicide bomb attacks that killed 258 people.

Church-run schools will reopen next week after state schools resumed classes on May 6.

Cardinal Malcolm Ranjith said Sunday Mass will resume in churches on May 12 after consideration of the security situation in the country.

"We don’t want a single child to suffer as a result of unwanted attacks. We have decided to reopen schools on May 14. That will also be on the advice of security forces in various areas of the district," Cardinal Ranjith told reporters following a press conference with 12 bishops and President Maithripala Sirisena in Colombo on May 9.

The cardinal has criticized the government for not acting on foreign intelligence reports that attacks were being planned on Easter Sunday.

“Officials got the information but it was not communicated in a proper manner and we experienced great losses,” he said.

“We hope that now government officials will get the support of international intelligence and have a proper mechanism to combat terrorism activities in the country.”

President Sirisena has assured citizens that the security situation is now under control.

All state and private schools were due to open for the second term on April 22 but due to the terrorist attacks all were closed until further notice. Cardinal Ranjith appealed for people of all faiths to remain calm after the so-called Islamic State claimed responsibility for the bombings of three churches and three hotels.

“We repeatedly say that all Muslims are not responsible for these brutal attacks. This was done by the youth who have brainwashed with extremist ideology against Muslim teachings. There is no war between religions — this is purely dealing with terrorism,” he said.

“I asked Catholics not to take revenge and fight with Muslims. Our religion teaches forgiveness for those who do wrong to us.”

A mob attacked Muslim-owned shops and a vehicle after a dispute between a tuk-tuk driver and villagers in Porutota near Negombo on May 5.

Cardinal Ranjith celebrated Mass on May 9 at St. Sebastian's Church in Negombo where more than 100 people were killed on April 21.

“With a guard provided by security forces, we had Masses and Buddhists had Bodhi Pooja [veneration of the Bodhi tree] for the departed souls," he said.

Bishop Andradi said he had spoken to other religious leaders about how to promote religious harmony and coexistence among people.

Bishop Joseph Ponnaiah of Batticaloa said people were scared after the Easter Sunday attacks but generally have a good rapport with Muslims.

"Most of the shops in Batticaloa are owned by Muslims and Muslim people give support to the security forces by providing details of suspected terrorism places," he said.

"We request people to be vigilant and take safety measures. We had dialogue with interreligious leaders to build peace, harmony and reconciliation.

"As a Catholic community, we should understand that all Muslims do not wish to harm us.”