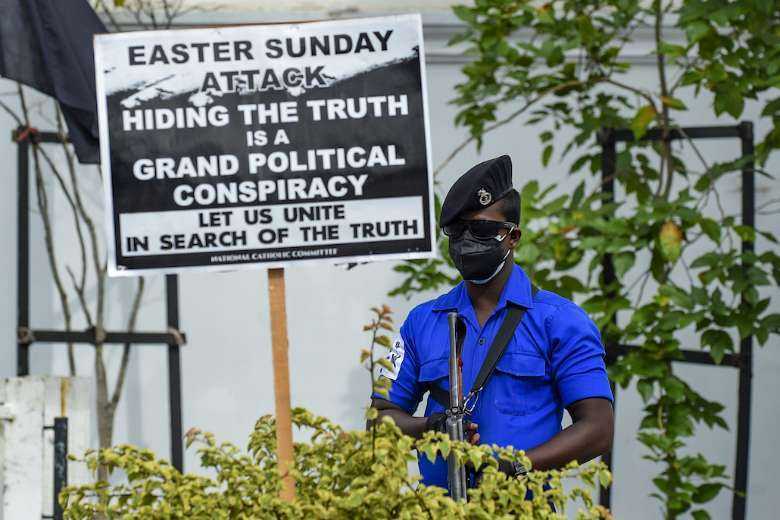 A navy sailor stands guards at the St. Anthony's Church in Colombo on Aug. 21 next to a placard placed in protest over the alleged failure to prosecute those responsible for the 2019 Easter Sunday bombings. (Photo: AFP)

Catholic churches across Sri Lanka hoisted black flags to mark "Silent Black Protest Day" to protest the government’s inability to find the masterminds behind the 2019 Easter Sunday terrorist attacks on churches and hotels.

Black flags were flown at churches, businesses, offices and main streets across the country on Aug. 21. In some areas, Muslims and Buddhists hoisted black flags in a show of solidarity.

Church bells rang at 8.45am, the time of the first blast on Easter Sunday two years ago. Prayer services were held without congregations because of the Covid-19 lockdown which began after 10pm on Aug. 20.

Leading Catholic figures, notably Cardinal Malcolm Ranjith, have piled pressure on the government to identify the real conspirators behind the suicide bombings.

Cardinal Ranjith, the archbishop of Colombo, said it has been revealed that there is a great conspiracy behind the Easter Sunday attacks.

"The authorities were informed four times by the Indian intelligence service. Activities at Lacto estate in Wanathawilluwa and the attack on Buddha statues in Mawanella made it clear that something terrible was going to happen. The authorities covered them up and let people be killed," he said.

"God reveals in various ways that there are other groups behind the great conspiracy. The authorities are trying to cover it up by misusing their power but God doesn't allow them to hide. We pray to God to expose the conspiracy."

The cardinal was speaking at a special morning prayer service at the main church of the archbishop's official residence in Colombo.

“His Holiness the Pope, the secretary-general of the Vatican as well as members of the Pontifical Council for Justice and Peace have been updated about the situation. The Vatican will respond soon," said Father Perera.

Twenty-five people were charged last week in connection with the attacks but the Church has accused the government of failing to take steps to identify the true conspirators.

Following the attacks, former defense secretary Hemasiri Fernando and former police chief Pujitha Jayasundara were remanded in custody for failing to inform the public and prevent the attacks despite receiving warnings of a possible attack.

Because of a communication breakdown between former president Maithripala Sirisena and prime minister Ranil Wickremesinghe, they were blamed for the government's failure to act on the warnings.

A group of senior police officers visited chief Buddhist monks to explain allegations in the Presidential Commission report that they failed to prevent the attacks. The final report recommended that the law should be enforced against several police officers.

I don't even want to be buried on this earth where my husband and two children are killed. This earth is a cursed land

S.M. Chandrasena, minister of lands, said the president had instructed the security forces to find those behind the attacks.

"Two or three hundred have been remanded and cases have been filed," said Chandrasen.

R. Niranjalee, who lost her husband and two young daughters in the attacks, said she has lost all hope that the government will punish the culprits.

"Although many people in my village in Negombo have been completely disabled by the bombing, I don't think the perpetrators will be punished," she said.

"I don't even want to be buried on this earth where my husband and two children are killed. This earth is a cursed land.”