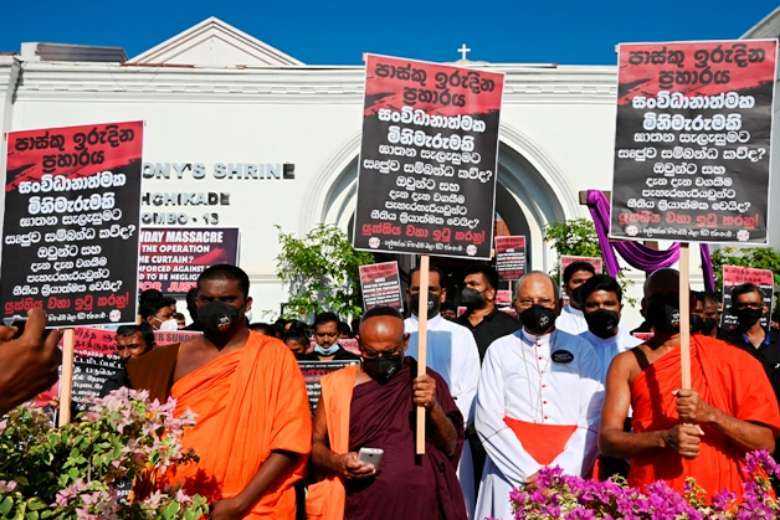 The Sri Lankan Church has told former president Maithripala Sirisena to appear before the law rather than swearing on the Holy Cross to prove he had no prior knowledge of the Easter Sunday attack in 2019.

"If the former president has anything to say, he can state it before the law or before the Criminal Investigation Department (CID)," said Father Cyril Gamini, a member of Colombo Archdiocese's committee seeking the truth behind the terrorist atrocity.

Sirisena need not wait until elections to reveal the truth, the priest added.

Sirisena had offered to swear on the Holy Cross that he was never alerted about the impending bombings while also refuting the allegation that he deliberately got himself admitted to a hospital in Singapore.

Speaking on Feb. 28, Father Gamini said the former president’s statements such as "I will tell when the time comes" or offers to swear on the Holy Cross will not solve the problem.

The priest was questioned by the CID about certain claims he made at an online forum about the Easter Sunday attack.

We have exhausted all options within the country to find justice. We need to find new avenues through which we can find justice internationally

Bishop J.D. Anthony, auxiliary bishop of Colombo, said that the pope and Cardinal Ranjith discussed people's struggle for justice ever since the 2019 bombings of three churches and three hotels.

"We have exhausted all options within the country to find justice. We need to find new avenues through which we can find justice internationally," said Bishop Anthony. "We love our country and need help from the international community to seek justice."

The Bishops' Conference of Sri Lanka said in a statement that it saw no other alternative but to seek international assistance to ensure justice is done to the victims of the Easter Sunday attack.

"Bishops are appalled at the failure on the part of the government and the Attorney General’s Department to move to implement the recommendations made by the Commission of lnquiry into the Easter Sunday bomb attack. As there seems to be not only a delay but attempts to hide the truth, exploit the massacre for political gain and also to complicate the issues, we see no option other than to seek international assistance to help mete out justice to the victims," said a statement issued on Feb. 26.

The Global Forum of Victims of Easter Attack organized a prayer service in support of the victims at the Vatican on Feb. 27. It was attended by many Sri Lankan Christians residing in Australia, Canada, France and Italy.