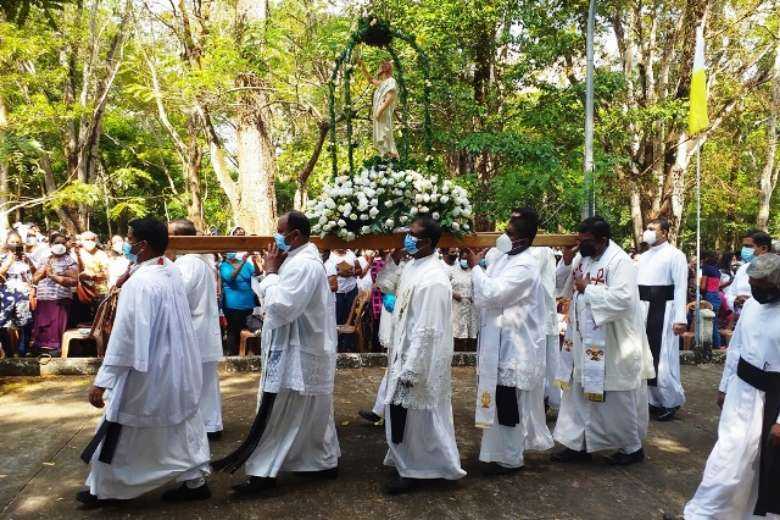 Priests carry the statue of Risen Lord, containing the blood of Easter attack victims, in a procession to mark 1,000 days since the 2019 terror attack at the Basilica of Our Lady of Lanka on Jan.14. (Photo: Quintus Colombage/ UCA News)

Sri Lankan Catholics flocked to pray on the 1000th-day commemoration of the Easter Sunday bombings on Jan. 14, demanding justice for victims of the deadly terror attack.

Thousands including bishops, priests, nuns and laymen from across the island nation walked to the Basilica of Our Lady of Lanka in a distant suburb of Colombo to pray and urge the government to punish the real conspirators behind the crime.

The faithful walked to the Basilica with banners and rosaries while priests carried a statue of the Risen Lord.

“It is now clear that the Easter attack is a conspiracy. It is now being revealed that some political leaders wanted to use the attack to gain political advantage by blocking those who were aware of the activities of a group of extremists and did not try to prevent it,” said Cardinal Malcolm Ranjith.

A group of suicide bombers affiliated to local Islamist group National Thowheed Jamath was suspected to be behind the bombings at three churches and three luxury hotels on Easter Sunday in 2019, killing at least 269 people, including 37 foreign nationals, and injuring at least 500.

Catholics are not happy with the investigations that have been done so far.

“Susantha, who lost her whole family, is with us today. He told me that he goes to sleep in the cemetery because he had lost his whole family. Anusha Kumari who lost her two children and husband is also with us today. These are just some of the many victims in this tearful story. Some others are in bed forever,” said a visibly emotional Cardinal Ranjith.

He assured those gathered that God is with the victims. “They are the wealth of the church. I still learn a lot from these suffering people.”

He said that the politicians who ruled the country for 73 years had destroyed the country. “Many people try to divide the bishops for political gain but we are together. I thank God for unity among all bishops. Let’s work together with all communities,” he added.

Referring to a live hand grenade found at All Saints Church in Borella on Jan.11, Cardinal Ranjith said he was not satisfied with the investigations.

Inspector-General of Police Chandana Wickramaratne claimed to have recorded 14 statements regarding the incident which was being investigated. Three suspects, including the caretaker of the church, were arrested.

But Cardinal Ranjith alleged the authorities had fabricated a false story. “If the minister is honest, he should look into the evidence presented by us (the church). Neither the government nor the police want to investigate the incident in a transparent manner,” he said on Jan. 15.

Rohitha Rodrigo, who came with a group of faithful, said:  “The government is trying to silence the church through various incidents and stories. That is exactly what has been done to Muslims and Tamil minorities in the country.”