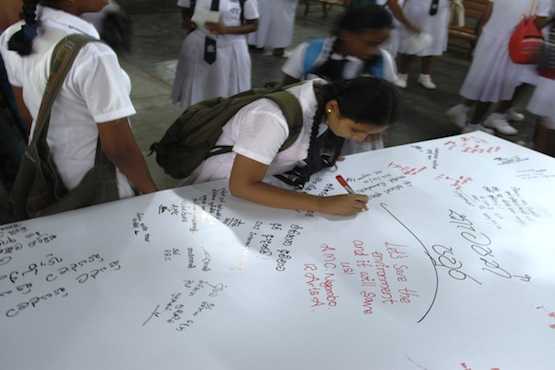 Catholics in Sri Lanka celebrated World Environment Day by promoting the encyclical Laudato si as a way to combine their faith with environmental protection.

"We distributed the translation of the encyclical among groups to come up with ideas and it has taken readers through the process of seeing, judging and acting with regard to the ecological and environmental crisis we are facing today," said Delryn Wanigaratne, member of the organizing committee for the event.

World Environment Day, introduced by the United Nations Environment Programme, is observed every June 5 and aims to help the public take positive environmental action to protect nature and planet Earth.

However, organizers of the event said they wanted to celebrate the day as the first anniversary of Laudato si, the encyclical with the subtitle On Care For Our Common Home published May 24, 2015.

"If our people had an ecological education and spirituality, they would not have used harmful chemical fertilizers and pesticides that have poisoned farmlands and water sources in the country," said Wanigaratne.

"Our efforts are to promote toxin-free food, protect our environment, our soil, water and food from further poisoning by chemicals," he said.

"It was a great opportunity to discuss with experts," said Nimal De Silva, a university student who attended the event. "It might help promote dialogue on the environment and justice for action," he said.

Sanjeewa Indrajith Wijesinghe from Chilaw Diocese said he organized a signature campaign at the event to send to the Sri Lankan president to bring about a policy plan to protect the environment and to avoid local and international projects that are harm bio-diversity.

He said overuse of chemicals in food production has given rise to poisonous agro-toxins affecting the lives of thousands of poor people in farming communities with chronic kidney disease, the progressive loss in kidney function.

A World Health Organization report showed that more than 15 percent of the population aged 15-70 years in North Central and Uva provinces have been affected by this disease.