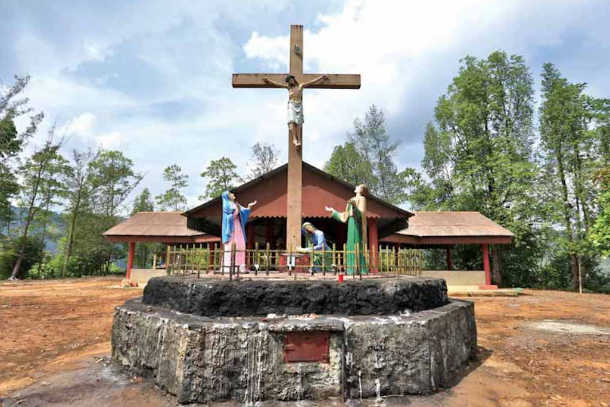 Hiniduma Calvary is peaceful and relaxing for Catholics. It is situated on a small hill next to St. Anne's Church and the Gin River flowing between the church and the shrine. (Photo supplied)

Waking up early in the morning with a group of 20 faithful, Agnus Mary boarded a bus to Hiniduma Calvary, a national shrine 160 kilometers south of Sri Lankan capital Colombo.

The 54-year-old from Ja-ela and her companions sang Pasam (Lenten hymns) and recited the rosary until the end of their journey.

All pilgrims had very simple meals. Mary took part in a Way of the Cross and sang lamentation hymns with the group at a replica of Mount Calvary in Jerusalem where the crucifixion of Jesus took place.

Hiniduma Calvary is peaceful and relaxing for Catholics. It is situated on a small hill next to St. Anne's Church and the Gin River flowing between the church and the shrine.

"After this pilgrimage, our hearts are very happy and relieved," said Mary. "My parents used to take us to this pilgrimage. We are taking our children today."

Father Ravi Seneviratne, the parish priest, said the shrine was founded by Father Cyril Edirisinghe. "The shrine gets hundreds of pilgrims every year during Lent," he said.

Catholic pilgrims walk around the small hill lined with statues depicting the crucifixion of Jesus in 12 locations. A large cross is on top of the hill.

The shrine, which is under Galle Diocese, is one of the most popular Lenten pilgrimage sites in Sri Lanka.

Father Edirisinghe saw a wildfire on the 18-acre site in 1948. After the fire, the priest witnessed that a burnt tree was the only thing left on the summit resembling a cross. It became the first inspiration for the shrine.

The journey to Hiniduma Calvary is difficult and tiring but the faithful sing Lenten hymns as they walk from station to station for the Way of the Cross.

Hundreds of pilgrims like Mary attend spiritual exercises during Lent in her parish. They include healing services, Way of the Cross, Holy Hour, Mass, meditation and prayer services from morning until evening every day.

She is a member of Legion of Mary in Negombo and still lives in fear after the Easter Sunday suicide bomb attacks last year. Negombo is a city where people live in peace but last Easter that peace was shattered.

Some villagers avoid meeting visitors. Some do not want to participate in night-time programs. People who can talk are tired of repeating their experiences.

Some victims have been trained to face life’s challenges with the help of counselors.

"Many faithful joined the pilgrimage this year to pray as a group," said Ranaweera, who went to Wahacotte Calvary with members of Legion of Mary. "We pray to God not to see such destruction in this country or in any other country."

Rasika Fernando, who has studied theology, said many people make pilgrimages to experience spiritual enlightenment and a deeper understanding of their beliefs.

"People on pilgrimages seek more blessings from God. It is an exceptional and deeply personal effort made by individuals that they need for spiritual reawakening," he said.

Horana, Alagollawa and Hiniduma shrines are located in scenic places where Catholics can enjoy natural beauty.

Fernando said Lent pilgrims can experience a significant time with Jesus in a peaceful, natural environment.

"During the season of Lent, the surroundings of all these different shrines in the country are filled with pilgrims from morning to midnight and they observe the Way of the Cross," said Fernando.

"These pilgrimages seem to increase their devotion and faith as a family."