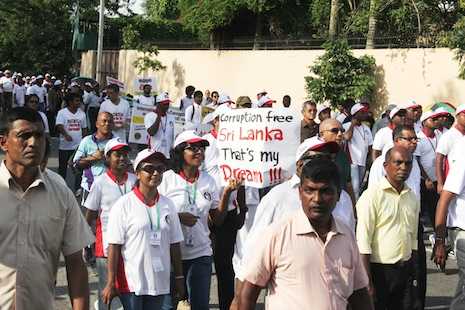 More than 1,000 people marched for a corruption-free Sri Lanka Dec. 9 in Colombo. (Photo by Quintus Colombage)

Catholics have added their support for a corruption-free Sri Lanka and the amending of laws to enforce abuse of power and misuse of state resources by public officials.

More than 1,000 people marched through the streets in Colombo Dec. 9, demanding amendments to the Prevention of Corruption Act that will enable the Commission to Investigate Allegation of Bribery or Corruption to work independently and without political interference.

Victor Ivan, founding editor of a Sinhala weekly newspaper 'Ravaya' said the amendment would empower the media and public to scrutinize and discuss the asset declarations of senior public servants.

Currently, there are legal restrictions that prevent individuals from publishing information of what they received, said Ivan who won the National Integrity Award 2015 for pioneering a fight against corruption.

"The Catholic Church has formed a special justice and peace desk in the country and bishops and priests have urged people to choose corruption-free candidates to the parliament," he said.

"The local church is against corruption and bribery giving and people have suffered from much corruption during the past 30 years," Father Rodrigo added.

President Maithripala Sirisena, who attended the meeting to mark World Anti-Corruption Day, swore to eliminate corruption from Sri Lanka, saying he would present to Cabinet and parliament a bill to amend the current law.

In the annual Global Corruption Perception Index released by Transparency International, Sri Lanka ranked 85 among 175 counties in 2014 adding that over the past decade the country has been leaning toward being highly corrupt.