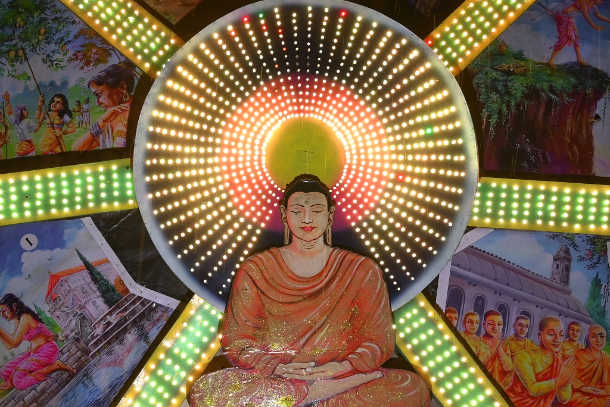 A display featuring a seated Buddha during the Poson Poya festival in Colombo on June 7. Poson Poya is an annual Buddhist festival marking the introduction of the religion to the island. (Photo: Lakruwan Wanniarachichi/AFP)

Cardinal Malcolm Ranjith has called on the Sri Lankan government to allow the faithful to attend church services under quarantine laws as the country contains the Covid-19 outbreak.

"In the face of the coronavirus pandemic, the Church halted Masses and church services," said Cardinal Ranjith as he celebrated Mass in a June 7 broadcast.

The Sri Lankan Church canceled Masses and other services in all parishes across the country on March 15. The decision came in the middle of the Lenten season that features common gatherings such as the Way of the Cross, Lenten pilgrimages, group meditation, healing services and group prayer services.

The country has been successful so far in the fight against the coronavirus. According to the Health Ministry, there were 1,835 Covid-19 cases with 21 more testing positive for the coronavirus as of June 7.

Mary Silva, a member of the Legion of Mary, said she has not been able to attend Mass since March 19.

"I and my family have attended Mass every Sunday since my childhood except during the Covid-19 period," said Silva. "There have been no Sunday school for our children, no wedding ceremonies, no holy hours, no healing services, no parish meetings and daily Mass."

Cardinal Ranjith, the archbishop of Colombo, said the Church has given its full support to government efforts to stem the epidemic and suspended all activities.

"We ask that those who are eagerly waiting to attend Holy Mass should be allowed to do so under certain conditions and with a limited number of people under quarantine laws. Other religions should also be given the same opportunity to do so," he said.

Cardinal Ranjith requested that services resume by following health guidelines and with the participation of a limited congregation.

Buddhists celebrated the Poson Poya festival on June 5 at home after a curfew was enforced throughout the country. Poson zones, almsgiving stalls and pandals were canceled this year.

The Catholic Bishops' Conference of Sri Lanka called on all followers to observe March 22 as a day of fasting and prayer calling on the Blessed Mother to intercede with God to prevent, protect and heal all nationwide and globally and to rid the world of the devastating virus.

Cardinal Ranjith also made a vow to Mother Mary at the National Basilica shrine in Tewatta to save Sri Lanka from the coronavirus on April 3.