The 2019 bombing of churches and hotels was not carried out by a few persons, says Cardinal Malcolm Ranjith Catholic priests and nuns carry photos as they pay tribute to victims killed in the 2019 Easter Sunday bombings at St. Sebastian's Church in Negombo on April 21. (Photo: AFP)

Cardinal Malcolm Ranjith of Colombo has hinted at a bigger conspiracy behind the 2019 Easter Sunday suicide bomb attacks on churches and hotels that killed 269 people in Sri Lanka.

“The Easter attack was not carried out by a group of seven or eight persons. There is something big behind the attacks and we need the support of the international community to find out who used these persons to fulfill their objectives,” he said in a webinar on Oct. 16.

Cardinal Ranjith recalled that Sri Lankan President Gotabaya Rajapaksa had called him a couple of days after the release of the Presidential Commission of Inquiry (PCoI) report to say it was impossible to implement everything that was recommended in it.

The PCoI appointed to investigate the Easter Sunday attacks “had recommended that the attorney general should get intelligence units to carry out investigations on a series of unclear areas” but it has not happened, he said.

As recommended in the report, Cardinal Ranjith has sought legal action against former president Maithripa Sirisena for negligence and failing to act on foreign intelligence warnings of a possible attack.

The Catholic Church has maintained that the government should implement the recommendations of the PCoI report in order to win the confidence of the Catholic community and the general public. Black flags were hoisted at churches in the country to mark a Silent Black Protest Day against the government’s inability to find the masterminds behind the attacks.

The chief justice appointed a trial-at-bar to hear cases against 25 suspects. The attorney general requested to hear and determine 23,270 charges including conspiracy, preparation, aiding and abetting, collection of explosives and weapons, murder and attempted murder.

Sri Lankans living in European countries and the US have held demonstrations demanding justice for the Easter attack victims in recent weeks, while Prime Minister Mahinda Rajapaksa's visit to Italy in September was mired in controversy after Cardinal Ranjith called it an attempt to mislead the Vatican about the probe into the attacks.

Michelle Bachelet, the United Nations high commissioner for human rights, has said that despite various inquiries, the victims of the 2019 bombings and religious leaders continue to call for truth and justice, plus a full account of the circumstances that permitted those attacks.

Buddhist monks have criticized the Catholic Church for going international when the Sri Lankan government had taken several steps to ensure justice for the victims. 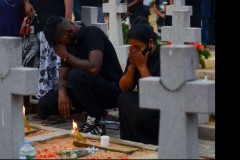 Niroshan Fernando, a victim from Negombo, said: “Those who came to power speaking of the attacks are now avoiding the issue of justice for victims. Not only bishops but the people of this country have lost faith that justice will ever be done.”